Seek, find and be amazed!

…these words seemed to them an idle tale, and they did
not believe them.  But Peter got up and ran to the tomb;
stooping and looking in, he saw the linen cloths by themselves;
then he went home, amazed at what had happened.

The ancient rubbish tip outside the ancient Egyptian town of Oxyrhynchus yielded a Greek fragment of the curious text of the Gospel of Thomas - an enigmatic book which contains morsels of Jesus material at least as old as our first three Gospels mixed in with odd philosophical and even heretical musings from the third century.  It’s not been included amongst our canonical Gospels for some quite good reasons.  Nonetheless it does yield the odd gem:

(2) [Jesus said], "Let him who seeks continue [seeking until] he finds.
When he finds, [he will be amazed. And] when he becomes [amazed],
he will rule. And [once he has ruled], he will [attain rest]." 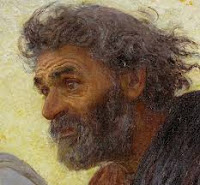 There is no question that the disciples and other early witnesses to the resurrection were perplexed, thunderstruck, disturbed and, in the case of Peter in this Sunday's Gospel, “amazed” by the events of Easter Sunday morning.  That they did not understand immediately doesn’t seem to matter because our Evangelists are telling two parallel stories about the Easter morning events and the appearances of the risen Christ in the days which followed:  What did God do?  And (because the Gospels are designed to be read by men and women of faith and to help refine and underpin that faith with the historical record) How did men and women come to faith in the risen Christ?

The resurrection of Jesus is not an incomprehensible loud noise which deafens the attending disciples. Their perplexity is temporary.  It will be nurtured into faith through their fellowship with the risen Christ, through his words in the following forty days and through the future confirmation of the Holy Spirit.  This is the remaking of a fallen creation.   God’s pledge is to make that creation new again.  The risen Christ will be not only observed but in fact witnessed (there’s a difference!) and then proclaimed and for that to happen the Resurrection will come to be understood.

I want to point to one very early response, on Peter’s part, which even preceded his sprint to the empty tomb much less any coherent understanding.  The women had returned with a story which seemed, to the gathered and grieving disciples, a vain and empty tale.  Without any particular textual justification, I can imagine Peter in another room hearing every second word shouted out by grieving and perhaps even angry disciples as they argue with the women.  The words beyond the wall sink in – idle – tale - master – gone – tomb – empty.   The merest shred of possibility presents itself that all is not in fact ended.  Like a dull ember buried deep in the ashes, hope finds a little tinder in Peter’s soul and catches light.   He’s off like a shot.  Prior to faith in full flower there can be both will and openness.

Keep your ears open.
Honour the hunger within you.
Seek until you find.
Be amazed!