The most recognisable song from “Les Misérables” is set amidst the decay and turmoil of Paris in the 1830’s.   The song is defiant and hopeful.  It is a young person’s song.  The voice of the people will lead the way.  They can be trusted to do the right thing.  Well that’s the theory anyway.

A number of you this Sunday will note how the long Passion Gospel from Luke is divided up amongst the several voices expressed in the story.   We all have our parts to play.  It’s fitting that ordinary human voices should be heard. 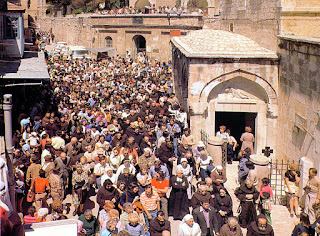 Jesus has a voice in this long reading.
Pontius Pilate and the religious authorities in Jerusalem have their voice as well -
and of course there’s that voice of the crowd or the assembly calling out in unison: Crucify him!

What is a crowd, anyway?  Like the man said in the fine print:  Your experience may vary.

If you’re a policeman a crowd is something to be controlled.  If you’re an entertainer, you might look at the crowd in front of you as something you need to whip up or encourage to sing along with you or to laugh at your jokes.  Those of us who live in democratic societies look to crowds to cast a vote in general elections and referendums.   We delegate, to their hands, the destiny of our nations.

For most of us Passion Sunday is also Palm Sunday.  At the beginning of our service we heard the voice of Jesus’ followers crying out during the Triumphal Entry into Jerusalem that Jesus is blessed and that he is the coming Messiah.  And so we cannot avoid being smacked in the face by the change in the crowd’s tone between one Gospel and the next.  Let’s not try to score any easy points.  This is not a jab at the madness of that particular historic crowd in Jerusalem nor does the Gospel reading join us in in our disdain for a crude contemporary public whose taste in music, religion or politics we might despise.    To avoid ever accusing somebody else we are therefore asked to take our part in the readings this Sunday.

Salvation is the gift accomplished by Christ for us and freely given to us.  That’s what the Gospel accounts are at pains to show us - not in a simple statement but in the layered drama of the Passion accounts.   Any potential partners in salvation are peeled away from the story.  Pilate (and with him the greatest administrative state the world had ever known) is out for the count.  The priests and the scribes are out as well (and with them the historic religion that presumed to know God best).  The disciples, Judas - even Peter - either betray or deny Jesus.  God shoulders the burden of the cross himself.    And as for the voice of the people?

The crowd, it would appear, is just another failed actor.