Which boy are you, then?


Put yourselves in the shoes of one of the characters in this Sunday's parable of the Lost Son:  Which boy are you, then?  You might identify more with the father  – your choice could well reflect the things which have happened to you in the course of your life.  When the Pharisees gathered at the margins of the crowd listening to Jesus speak they noted with dismay how many outcasts and misfits had gathered to listen.  Jesus set the Pharisees more or less this very task:  Who are you in this story?

One of the two boys went off the rails, taking a piece of the family fortune with him.  He came back recently with his hat in his hand after months of indignity, pain and deprivation.  Life “off the rails” proved a dreadful combination of place and circumstance which the boy still cannot describe without tears.

The father welcomed the lost younger son.  This he did joyfully, extravagantly and with generosity.  He didn't spare his own dignity and even endured being cast as an old fool for the way he ran out on bandy legs to meet the boy when he was still a fair way down the road.  Ridiculous?   Old and foolish?  The only feeling he can remember was the palpable joy and anticipation at having the boy whom he loved and thought he’d lost back at the family table.  That was feeling enough for one day. 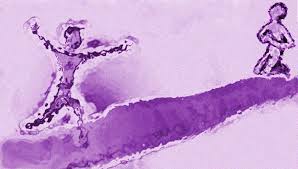 The old man now reasons gently with his older son who is mightily put out by his father’s public welcome of the prodigal and is boycotting the homecoming party.  His father was forced to get up and leave the festive table to go outside where his son was lingering under a tree, livid with rage and humiliation.  He speaks slowly to him.  It’s not that the older boy is stupid, mind.   There is, nonetheless, something quite basic that he has not understood.

What should a father share with a son ?  What does a son inherit?  Is it an inventory of barns, grazing lands, outbuildings, servants and equipment?  When we are strong and in control we might concentrate the goods of the father in our own possession without sharing much of his character. What sort of inheritance is that?  The estate is ours by right.  A jury of our peers would agree.  So what?  If the point of our belonging is that somebody else does not belong, then what does that say about us?  Cold calculations always cast the realm of feelings to one side but this story cannot be divorced from the father’s feelings for the one who is lost - it is the heart and engine of this parable.  It is love and not right which makes the world go round.

Children are a perpetual worry.  The day of great risk for the prodigal is over.  As we speak now he is in the house wiping a bit of grease from his chin and raising a cup to his lips.  He has been restored to the table.  It is love and concern for the older brother which motivates the father's second trip of the day and all his hushed remonstrations in the garden with a son who, curiously, has everything and nothing at the same time.

The day of risk for that boy has just begun.