Good wine at the end 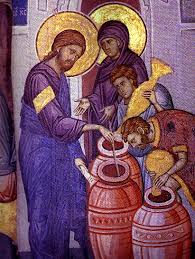 Those of you who read up on the Auvergne before moving here will know that this was one of the great wine regions of France before some bright spark had the clever idea of bringing vines over from the New World to plant on French terroirs and took little notice of the tiny aphids (Phylloxera vitifoliae) clinging to both root and branch of the American vines he shipped in on the boat.  The rest is sorry history.  The restoration of the wine industry with new grafted vines came late to our region.  Our local wines are only now beginning to climb back on to the register.  Good wine is produced after decades or centuries of interaction between grape type and soil consistency.  Good wine isn't produced in an instant.  Unless you were a guest at the wedding at Cana, that is....  On that occasion copious amounts of the very best quality wine issued from stone containers which had to that point contained only water.  I remember one of my past parishioners expressing frustration with me that the story required any explanation at all.  Didn't I believe in Jesus?  Don't I believe in miracles? If Jesus is on site, then miracles happen and bad situations are reversed - these thirteen words are all that is required.  Here endeth the sermon.

Calm down dear (I wanted to say but didn't).  John's Gospel puts it like this:

Jesus did this, the first of his signs, in Cana of Galilee, and revealed his glory; and his disciples believed in him.

A sign points beyond itself to something else.  Even if it begins with a particular problem in time and space it then points out of the room and away from the cups on the table and beyond whatever problems the party's hosts may have.  Jesus performs a handful of miracles.  When he does they are never merely miracles.  They teach us something about God - wrapped up, as they are, with the larger story of the restoration of Creation in the story of the Word's "dwelling with us".  The story informs much more than any present crisis which the instantly needful might want to aim Jesus at.  The party will go on - with or without wine on the table.  Jesus promises his disciples no shortcuts.  He often tells them that they will engage painfully with the world around them but that they will be equipped by him, through faith in him – the one who drives the nourishment up the vine and swells the full fruiting berry.  It is all about that ineffable thing which we lift our glass of good wine to - which is life itself – full and rich and interconnected.  You might say that there is no shortcut to quality - to quality life anyway as the sort of good wine which a true connoisseur would describe with all those daft wine metaphors: "apples in the nose” or “notes of saddle leather, jujubes, and turpentine with a hint of combed cotton” meaning that the tastes and smells evoke and connect to other worlds and experiences.  Signs point to something else. Simple truths open many doors.

It’s not merely red wine on the table.  It’s not just a miracle.