Paul begins the 4th chapter of Romans by asking "What then shall we say about Abraham, our forefather according to the flesh?"  The answer, it appears, is rather a lot - all of Romans 4, in fact, and the entire 3rd chapter of his Epistle to the Galatians.  God who addressed Abraham back in Genesis 12-17 is one who, still today, "gives life to the dead and calls into existence the things that do not exist."  These words, says Paul, were written for us as well and not only to illustrate something which happened long ago.  They bear on the current life of Christians in Rome, in Croix de Neyrat and Chamalières.  They tell us how to be faithful in this church of ours - in this skin of mine.

A brutally literal translation of Romans 4:18 would say, of Abraham, that he

against hope
in hope
believed.....

which, while ugly English, at least has the benefit of emphasizing the two different ropes which we hold on to.  One is our own self-sufficiency.  It is admittedly quite a frayed thing.  Our character is flawed and sinful.  Our neurons are no longer fit for purpose.  We are too old.  We are young and stupid. The opportunity has fled elsewhere.  The judgement is against us. Our pipeline is vetoed.  That rope - whatever it was - will not support our weight.  We only delude ourselves by hoping that its fragmentary fibers will do what, we know full well, they will not do.  Part of the process is to let that fact sink in - definitively.  That first rope is hopeless.  It will not hold us up. 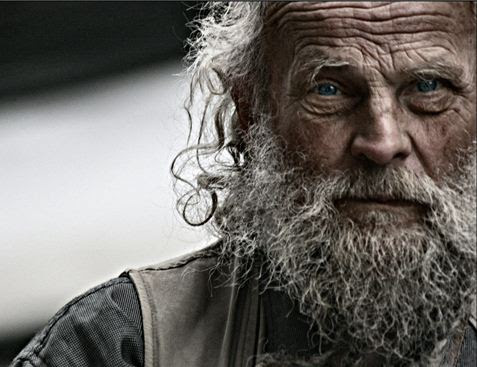 So why not switch ropes?  God never showed Abraham a mirror in order to encourage him that, if he eats all his veg, he might locate a bit of life left in that old frame of his - one more lap around the track, if you like. God pointed Abraham beyond himself - to the innumerable stars in the sky and the grains of sand on the beach.  "So shall your descendants be", says God.  I will make it so.  And "Abraham believed God".  The second rope.

Many young clergy imagine that their job is to tell people to keep their chins up and that things are probably not that bad.  "Hoping against hope" (NRSV!) is too often understood as an exercise in optimism - redeeming that one useless rope in the face of all evidence.   Instead of the power of God made accessible to those who believe we ape the motivational speakers and embark on some project about the power of positive thinking.