The Gospel of Mark was written down to be read by Christians.  It was no quick guide to Jesus for the enquirer or the sceptic.  That introduction to Jesus in the life of the reader had already happened.  He or she had, at some earlier time, been grasped by the power of the Holy Spirit through the evangelizing efforts of the Christian community and had been reborn through Christian baptism and nourished by the worship life of the Church.  The Christian reader is the observer of Mark’s account of Jesus’ ministry.  When the crowds in Mark’s Gospel - in Jerusalem or the Galilee - are confused about who Jesus is, the reader of the Gospel is watching them work that confusion out:  Who will believe and who will not?   Who will follow him gladly and who will not? 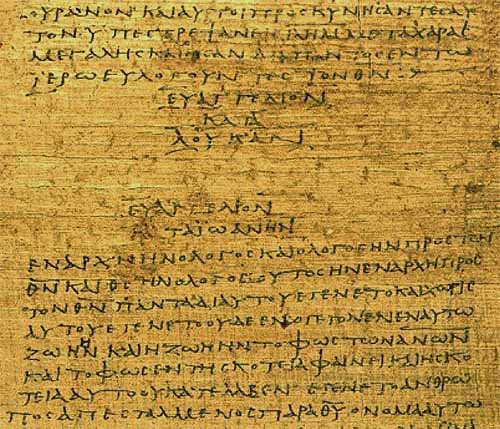 In the middle of Mark’s Gospel you’ll find the story of Jesus’ Transfiguration on the slopes of Mount Tabor.  What the voice from heaven had proclaimed in the beginning of the Gospel at his baptism (Thou art my beloved Son; with thee I am well pleased - 1:11) and what the Roman centurion would later deduce from the events surrounding Jesus’ crucifixion towards the end of the Gospel (Truly this man was the Son of God - 15:39) is here not only told to Peter, James and John on that hillside but is shown to them as well.  The veil is folded back for a moment.  Christ is revealed in a blast of light and surrounded by figures from Israel’s past - Moses and Elijah - representing the Law and the Prophets.  Here is no add-on to Israel’s religion.  Jesus is at the centre of God’s revelation to humankind.

Our Christian readers in the first century (or the twenty-first) turn from the Gospel account and look around at the lives they lead in the world as it is.  They might believe they have much to fear.  Their community is small and their future uncertain.  The world seems lukewarm to the truth of the Gospel.  Some of their own family members remain untouched and unreached.   Within the household of faith itself there are hearts not fully warm to the promises of God.   The Christian reader of the Transfiguration story knows, however, that the revelation of Christ to men and women is something granted.  It is a gift for which men and women should be more thankful than anxious.  Nothing is completely in our hands.  The disciples present at the Transfiguration - Peter James and John - can only babble.  Such is the extent of their contribution in this story.  They cannot yet understand the depth of Jesus’ person as it will be revealed.  God will work through us, around us and even in spite of us.  Christ stands revealed in glory as the Lord of heaven and earth.  His glory will be revealed to the ends of the earth.  He will be proclaimed and his purposes accomplished.