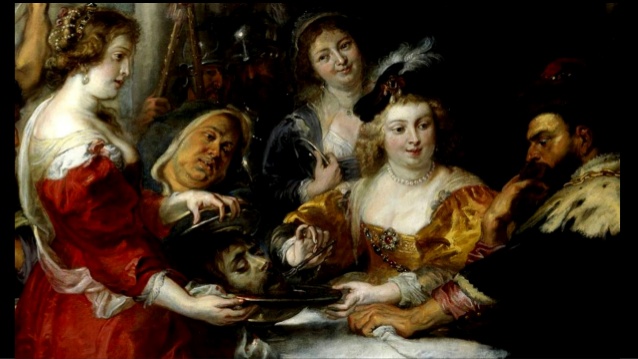 Mark's Gospel shows us a picture of Herod Antipas as a man divided between his sin and his salvation.

As brutal and arbitrary as any ancient ruler Herod, nonetheless, cultivates a residual place in his heart for the preaching of John the Baptist - his consistent and fiery critic - whom he has imprisoned in the dungeon.

When he heard him, he was greatly perplexed;
and yet he liked to listen to him.

One thing leads to another – in a series of unhappy accidents - and Herod finds himself forced, because of his passions and the public vows he has made, to have John beheaded in his prison on short notice and to present the prophet's head to his stepdaughter – known to us, traditionally, as Salome. The prophet John is finally silenced. The message he preached, however, has only begun to make itself known.

A painting by Peter Paul Rubens called "Herod's Feast" hangs in the National Galleries in Edinburgh. It's a ghastly rendering of the very moment when the head of John the Baptist is brought on a platter to Herod's table. According to one of the guides I spoke to, back in the day, it is a particular favourite of Edinburgh schoolboys brought on outings with their classes to the National Galleries.

In the painting, the assembled guests look down the table to where Herod is seated as host. He is the focus of the viewer’s attention and not the severed head. On Herod's face is written the anguish of a man who is sorry that he has silenced his opposition - the small channel of grace he had hidden away in the basement.

Our enemies, you see, are not always our enemies. Sometimes they are the only people able to speak the truth to us.

There are moments when we would do almost anything to be rid of the trouble we sense within us - the unrequited longing, the dissatisfaction and inner turmoil - or the critics around us. Cut the head off, we might mutter - put it out of our consciousness, forever. Please doctor, Father, counsellor, best friend – won’t you do something to silence this voice of doubt or insecurity? Make it shut up! Tell me I'm imagining it all. Give me a prescription. Wave your hand over me and intone some ancient words!

This would be the good and efficient thing to do. It would make sense. Unless, of course, things were seriously amiss in our souls and in our households. That nagging voice might be the best thing in us and not the worst - a healthy and discomfiting voice which we would silence at our peril.