She only touched the hem of his garment..... 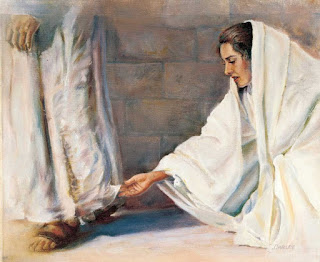 A small story, wedged into the midst of the larger narrative of Jesus’ healing of Jairus’ daughter, tells the tale of some nameless woman - ill and at her wit’s end - who pushes through the crowd to touch the edge of Jesus’ robe with the certainty that this is all that will be required of her.  She will never be asked to come to the lectern and testify, nor will she be give a box of church envelopes or asked to join the ACW.   Just this and nothing more.

George Frederick Root wrote a hymn about her in the late 19th century which appeared in the Sankey Hymnal in 1897.  It’s one of the hymns of my youth which I still sing in the car when I’m stopped at a red light.

She only touched the hem of His garment
As to His side she stole,
Amid the crowd that gathered around Him;
And straightway she was whole.

Oh, touch the hem of His garment!
And thou, too, shalt be free!
His saving power this very hour
Shall give new life to thee!

The earliest version of Root’s hymn had different words –  more rugged and arguably more self-assured.   The first line was:

In faith, she touched the hem of his garment

I’ve touched the hem of His garment,
And now I, too, am free;
His healing pow’r this very hour
Gives life and health to me

Good news for her, then, that saintly lady.   Well done, her.  Good news for whoever sings the song.  Good for them.  Great faith meets with great results.  That's what it says on the package.  We are ordinary people, though.  We in the back pews review the faces of great men and women of faith portrayed in their stained-glass windows and are left cold by the story of yet another spiritual athlete – very much unlike ourselves – who receives his or her due for that tremendous leap of faith which always eludes us.  The saints do things we cannot do.  They’re saints.

Ira Sankey clearly agreed.    His collection of hymns and sacred songs  - Sacred Songs and Solos:  1200 Hymns - contains a large persuasive offering to that crowd of people hunkered down in the last two pews of the meeting hall.  They have not yet put their hands up.  They have not signed their cards.  They have not yet walked up to the front of the church for prayers or initiated the conversation which would see them home.  They have, in fact, been coddling the impossibility of the task and rolling it around in their minds.

Sankey is collecting his tunes for the man, the woman, the boy or the girl in the pew who would discern within themselves what first preliminary step they might take.  Thank you, George Root, for a wonderful hymn but it needs a tweak or two.  The modified version, which appears ten years later, accomplishes two things:

First of all it returns the hymn to the story itself in the Gospels.  The woman takes a very small step (she only touched the hem of his garment…) - a step conditioned as much by desperation as anything she might have conceived of as faith.  It is Jesus, in fact, who, turning in the crowd, sees her there and declares that this small step is, in fact, faith.  It is faith in its seed as a preliminary act and proves, as saving faith, to be faith in its flower.  It is sufficient.

For those of you reading this blog post this afternoon, the question remains open.  I pose it in the spirit of St Mark the Evangelist and in the spirit of George Frederick Root, the composer of hymns, and of Ira Sankey, the curator of that great opus of 19th century hymnody (some of which remains entirely singable in the 21st):    What small act remains to you - born as much of desperation as of faith - which would constitute your small step of faith, and make what has seemed impossible to you both real and present?