Palm Sunday/Passion Sunday brings together two separate Gospel readings which seem like opposite sides of a coin. 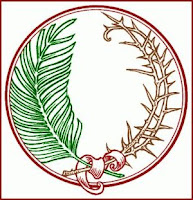 Before the service, and outside the Chapel, our little community gathers to bless the palm crosses and to hear the story of the Triumphal Entry of Jesus into Jerusalem:  the donkey, the waving palms and the jubilant crowds.

Hosanna in the Highest Heaven!
Blessed is the one who comes in the name of the Lord!

Later in the service, the regular Gospel reading of the day, long and dark, begins when an unnamed woman (in Mark’s version) breaks open an alabaster box of perfume and anoints Jesus.  The anointing at Bethany, for three of the four Gospels, is the opening salvo of the Passion Narrative – a story in which God’s will for the world is worked out in the flesh and blood of sacrifice.  The joyful crowds are replaced by scornful onlookers and Jesus remains largely silent throughout.

The preacher is oftentimes enjoined to preach quite lightly on this Sunday and throughout Holy Week.  What would the preacher have to add, after all?   Let the story do its work!  Let the crowds follow along!

In the earlier Palm Sunday story, the congregation follows physically as they make their way up and down church aisles or, in our case in Clermont, around the little chapel in Royat.  In the later Passion Narrative, they follow again (this time, imaginatively) the remaining disciples, the soldiers, the weeping women of the city and the mother of our Lord as they wind their way through the streets of Jerusalem on their way to Calvary.  What is there to do but to watch and to be there together as this story moves to its conclusion?

In his betrayal, Judas might have said that he has done what he must.  In his denial, Simon Peter has done what came most naturally to him in a moment of fear and panic.  The crowds appear to have been manipulated.  The disciples are helpless.  Even though Pilate is sitting in the judgement seat, even he appears not to be in control.  The story takes on a form of its own – we will have time to discuss and interpret it – we must first merely take our place in line and follow it as participants.

We are there, after all.  As failed disciples or as members of a pitiless mob or as bureaucrats and functionaries who take the path of least resistance.  We are there. This is our story.  We are there, more importantly though, as the ones for whom Jesus undertook this lonely pilgrimage.  We are the ones whom God loves – the ones he has elected to save despite themselves.   It's our story that way as well.

Any realism which touches on our sin and insufficiency must be underpinned by the larger point of the story:  God decided not to leave us in our sins.