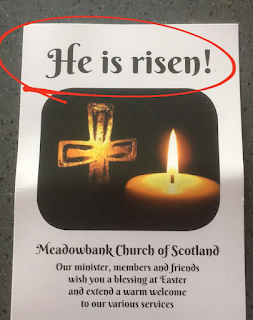 Ye seek Jesus of Nazareth, which was
crucified: he is risen; he is not here

I got a query this week from a young person in Scotland who sent me a picture of this flyer, which came through the mail slot from his local parish church, along with the following:

…a wee question: just saw this in the post and I’m wondering if this is correct. I have heard it before written this way, but [his girlfriend] thinks since risen is past perfect should it not be "has"? I don’t have an answer for her. Any help?

Well, one answer would be that the English language used to construct verbs of movement and emergence by using the auxiliary “to be” in the way that French still does:

You can find examples of this in the King James Version of the Bible:

I know that Messias cometh, which is called Christ:
when he is come, he will tell us all things (John 3:25)

Though I speak with the tongues of men and of angels,
and have not charity, I am become as sounding brass,
or a tinkling cymbal (1 Cor 13:1)

Archaisms endure in religious language.   We love 'em.  But it’s more than that.

One of the soldiers, say from Matthew's gospel, who’d been tasked with guarding the sealed tomb might have reported to his superiors about the Easter Sunday events that “Unfortunately, Sergeant, he’s no longer there.  He has risen.   It happened yesterday.  It's in my report”.

That same soldier years later in Asia Minor, having been the object of Christian preaching himself, is in church with his family on an Easter Sunday morning.  He grasps his neighbour’s hand and utters the traditional Easter greeting: “Alleluia, Christ is risen!”.  His friend would respond (as will you this Sunday) “The Lord is risen, indeed.  Alleluia!”.  This has nothing to do with old-fashioned language.

The power which animates this life amidst what seems like surrounding disorder and decay is the power of the Risen One.  He is contemporaneously present (in the midst of his people, in the midst of Creation itself, in the Sacrament of the altar and in Christian preaching) as the Risen One – who “is” and not only “was” gloriously alive.

Men and women of faith look, not to the historic victory of a hero against terrible odds, but to the contemporary presence of One whose victory is also their victory.  From that living presence flows the courage to proclaim the Gospel, to make justice in the Auvergne and around the world and to treat aging and weakness – even death itself - as no impediment to hope.  Such faith animates the ordinary life of the believer.  Death has been conquered in Christ.   My death and yours are conquered in him.

Of whom we say, in our prayers and Collects, that he “ … lives and reigns…..”