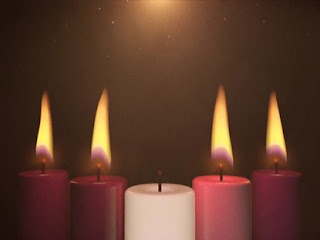 The fourth Sunday of Advent is also Christmas Eve.  And like December birthdays it so easily gets lost in the mix, and so I’d like to combine the two Sundays, the 3rd Sunday of Advent last week and the 4th upcoming.   In particular I’d like you to hold the two principal characters of the Gospels (from John and Luke, respectively) from these two Sundays in your mind:  St John the Baptist and Mary, the mother of our Lord - significant characters – both of them remembered, preached about, enshrined in stained glass in churches around the world, but whose significance is not so much based on what they do as on what they allow.  Their bodies and their beings are not so much hammers and javelins as they are doors and passageways.  I probably need to explain.

Many of you wonder how much significance you have in the world around you.  It’s clear you have some ambition at work.  It’s clear from the contribution you would like to make to your church or the associations you belong to.  You want to say your bit.  It’s even evident from your family life.  Ask your children whether mum or dad still wants to hold some of the reins.

It’s a thing – personal power.  You know it and the people around you know it.  Alfred Adler parted company with Sigmund Freud over Freud’s belief that sex was as much a fulcrum for the motivation of human beings.  Adler looked at it differently – no, he said, it is the quest for significance which motivates us.

Some of you have been beaten down in that.  You have the look of loss about you – what Adler meant when he coined the phrase “the inferiority complex”.  Some of you project an air of humility but behind all that you have a plan.   Other folks can hear the wheels turning.

Who are you then?  You might be on the younger end of life:  The sort of person who is battling in your salad days for a place on the ladder at work, for recognition among your social circle, for a listening ear in your family who haven’t cottoned on to the fact that you’re your own person now.  You’re somebody who would like to nail that funding, write that great Canadian novel, throw off the watching eye of the matriarchs and patriarchs – create your own footprint.

Or flip it around:  Perhaps your bus pass is not far down the road:  You worry that you will be superseded by people who are younger and stronger than you and able to leap tall buildings in a single bound.  The children are grown, your spouse is already answering questions with that Mmmm yes tone of voice indicating that he or she has not fully listened to you.   You may simply be trying simply to hold on to the gains you have made. 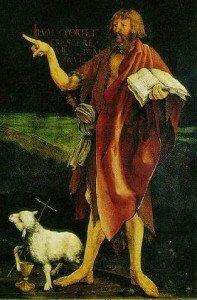 If someone were to say to you – younger or older - that the key to life is learning to step aside and that great power is involved in giving way in the days of your strength you might find that a hard argument to accept – quite counterintuitive, really.

The record of John is this:  that when he was questioned by the envoys of the Scribes and Pharisees about himself, at what must have seemed like the height of his career, with his preaching attracting not only people from the suburbs of Jerusalem out to his desert pulpit but residents of Jerusalem itself in considerable numbers – when he was questioned sharply about who he was he declared openly and clearly that he was not the expected Messiah.  Asked further whether he was some heavenly adjutant like Isaiah or Elijah returned from the dead he answered plainly:  I am not the Christ, nor am I Isaiah or Elijah.  I am just a voice and the one I announce is somebody other than me.  This success I take off and lay to the side.  I announce another.  Jump ahead a couple of chapters and he puts it even more succinctly:

"He must increase and I must decrease."

Mary hears the news from the angel Gabriel that her youth is being asked of God as a gift.  On the cusp of her adult life, God asks her for what must be the substance of her near future.  She will be overshadowed by the Most High  She must risk the marriage which is about to begin – her status in her community – the stability of the ordinary family life she had every right to and for which her community, her upbringing and even her own piety had prepared for her.  Her imagined future happiness, says the angel, must now include a sword which will pierce her soul also.

Biblical writers - describing conversations between God and a human agent be it Moses, or a prophet or such like – often leave out the silences.  God proposes and the human responds.  What gets missed in the narrative is that moment of silence which we must read in to the text – that necessary interlude, brief or not – where both Yes and No are possible answers.  Mary’s response to the angel, when it occurs, is her considered promise to be useful in the birth of something wonderful which is beyond herself.

"I am the handmaid of the Lord.
Be it unto me according to his word."

You were obliged in school to run at least one relay race.  You ran your portion of the track and then handed on the baton.  You’ve doubtless walked around graveyards filled with people who had their day.  It’s no mystery that we eventually give way in our generation.   If you are the sixth president of your Kiwanis club it is no Greek tragedy that there will be a seventh, eighth, ninth and tenth president.    Giving way is the most normal thing in the world in the long run and unless you are Chaucer or King Tut the memory of you will cease in all the land.

As you approach the end of the civic year and think about the new one looming up perhaps you feel a certain dis-ease.  Of what are you resolved as the new year begins?  What did you accomplish in the last?  Do you resolve to be more of a hammer this year?  Would you chuck your javelin a little further along the track this year, conquer a little more territory, build up your walls a little stronger – dominate the resources around you a little more effectively, do that thing, write those words, settle that challenge?

Take stock, won't you, of what has the greatest value.  The angels gathering around the birth, unlike Gabriel, have no names.  The names we attribute to the Wise Men are mere legend.  Nobody knows who the shepherds were.  They gathered to witness the arrival of what they could not give themselves, what no end of human ability will ever supply and what you, at your best, will never be.  Resolve at least, this Christmas, to place your trust in what you do not have yourself – to point, as John did to what shows itself to be stronger, better and more beautiful than you.   Allow yourself, as Mary did, to be a channel for something you can never own yourself.  Allow wonder to replace confidence.  Truth and beauty are given to us from elswhere.  Unwrap then, with this newfound attitude of wonder, the gift

Which has been prepared for you.
And for the people you love.
And for people you have never even met.