Now a new king arose over Egypt,
who did not know Joseph.... 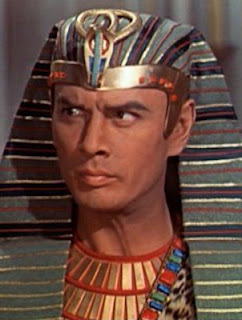 How quickly we forget.  Unlike other members of the animal kingdom, human beings carry around nearly all the information necessary to be a member of their species in their stories and not in their genes.  Activities which we perform by reflex or at the bidding of our hormones are precious few.   Instead, our children go to school.  They learn at their parents’ or grandparents’ knee.  They read from books.  Stories may be supple or rigid.  Stories can evolve and merge with the stories of neighbours.  They can be transformed in the retelling.  Rigid stories tend to be fragile.  National myths can be destructive.  And yet, civilizations can and do collapse when the cultural contents of the human story are forgotten.  Skip a generation and you will take a step way back into time.

The scenario described at the beginning of the stories concerns the new Egyptian king who, by malevolence or ignorance, “forgets” the role which God, Joseph and the Hebrews had played in the preservation of Egypt during the years of famine.  By intention or accident, the story of Egypt has a chapter ripped from its book.   Fellow citizens – artisans and laborers – established residents of great Egyptian cities became, in a moment, a despised minority.  We don’t need to look much beyond the 20th and 21st centuries to find analogs for this process within living memory.

For the readers of the Book of Exodus, be they Christian or Jewish, there can be no question as to the outcome.  The descendants of Abraham living in Egypt have a purpose and a destiny that will not be cut off.   They are part of a larger and more important narrative than the one by which Pharaoh hopes to purify his kingdom.  At issue, here again, is the overarching question:

How will God remain faithful to his promises to Abraham
to bless his descendants and, through them, the entire world?

There is no other question in Exodus.   Frankly, there is no other question in the Gospels or the Acts of the Apostles.  We remain glued to the page because the risks are many and, as is the case throughout the Old and New Testaments, human agents are used to propel the Promise through the ages.  Patriarchs, prophets and saints need to say “yes” and we don’t know if they will.  The promise may even need to be placed within a little basket of reeds daubed with pitch and bitumen and set out into the reedy edges of a great river.  And yes – it all must matter to you, who are praying for your little churches and saying “yes” to your part in the story, who pray that your children remain part of the same narrative, who wonder how God’s people will ever find their voice in a world grown suddenly more unstable and chaotic.

Stay tuned!  Hold on to the handrails!  You are part of this story.  It's never been one for the faint-hearted.