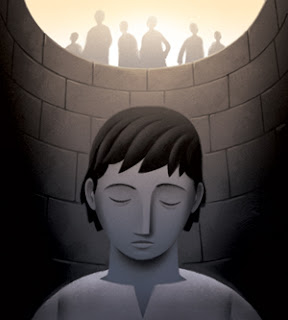 A book called The Joseph Cycle was written by Simon Sim in 2004 and used Joseph’s dream (Genesis 41:25-30), as recounted to Pharaoh, as the basis for a theory about markets waxing and waning in seven-year increments.  People buy Sim’s book because they want to make money.   Spoiler alert:  If you want to make money, then it’s off to Amazon with you.  Buy Simon Sim’s book. You’re not going to make any money reading this.

For a student of the Scriptures, the Joseph Cycle is a series of stories from the Book of Genesis about Joseph.  That it is referred to as a Cycle and not merely a Story means that the whole narrative has bits to it, ups and downs, highs and lows.  It doesn’t begin and end in a single chapter or reach its conclusion in a single episode.

Your bicycle has wheels.  When you run your finger along the end of them you come back to your starting point.  Joseph stands blessed amongst his brothers at the beginning of the story (Genesis 37) in this Sunday’s Old Testament reading, and he will stand blessed in the midst of those same brothers at the end of the story (Genesis 45).  Between these two points many events have taken place – many of them points of utter collapse and desolation.  If Joseph prayed to God to be protected by him -

- the answer from God would have appeared to him as an unequivocal “No”.   Let that sink in for a moment.

Do you have a sense of your own vocation, and of the fact that God loves you and that nothing transpires outside of his will and care?    Joseph did.  God gave him dreams.  He knows that God has a use for him and yet, when he prays to God for what seems like the most basic matters of freedom from peril, even these are denied.

Herein is the difference between a cycle and a simple story.  You need to wait until the end.  You will not see the sense of things until the circle is complete.   The episodes by which you judge yourself, by which you judge God’s faithfulness – this or that failure or success, this or that child’s misadventure or your failure in relationships or ventures – no matter how it feels in the moment – needs to be seen in the light of the story which God is telling over decades.  Be faithful enough to actively wait it out – patient enough (with yourself and with God) to see things to their yet-unknown conclusion.