The Terror of Isaac

The Fourth Sunday after Pentecost
Proper 8 - Year A
Genesis 22:1-14 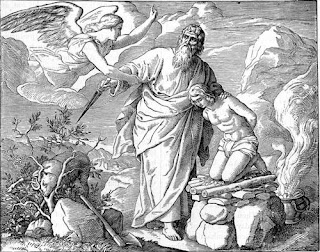 I am not alone in being defeated by this story in which God asks Abraham to sacrifice his son Isaac.  It’s a circle not easily squared.  It’s all made worse by the art with which the story teller in this section of Genesis relates the events.  There is tension and suspense – a long walk up Mount Moriah, a child’s innocent question about the absence of a sacrificial animal and all the detail of Abraham’s preparation of an altar and the disposition of fire and a knife.    Abraham, who once readily argued with God for the lives of any innocents who might have lived in doomed Sodom and Gomorrah, is here silent and compliant in response to God’s strange command.  He goes forth with his boy to Mount Moriah in the face of a seeming absurdity.  Am I professionally bound, as a priest,  to make this work for you?

The easy answers are those I was told in Sunday School: that God asks difficult things of those who profess faith in him and, after all, doesn’t God intervene at the very last minute to make the story right?  Colour a picture, children.  Use bright colours.  The slightly more technical answer that I was told in seminary was that this story served to express God’s    historic displeasure at the cults of child sacrifice which were not unknown in Abraham’s time and abolished them by providing a ram in the stead of the child.  None of these calms the dismay provoked by this story.  I would feel like a dangerous fanatic if I tried to make it all work out for you this Sunday.  I might seriously worry about those of you you who thought you could square this circle easily –and that you felt it was somehow all so “matter of fact”.  The rabbis struggled with this story for centuries.  Soren Kierkegaard wrote an entire book about it.  It’s not a simple story.

The rabbis of old had a “midrash” on this section of Genesis (a midrash is a traditional or legendary expansion of the central text) in which Abraham returned from Mt Moriah down one side of the slope and Isaac came down by another route and that they did not speak again.  I am further reminded of the oath which Isaac’s son Jacob later swore in Genesis 31:42 – an oath which he swore in the name of “the God of Abraham and the Terror of Isaac”.

In the sermon last Sunday, I related a curious coincidence in the similarity between this week’s story of the Binding of Isaac and last Sunday’s story about Hagar and Ishmael.  In both accounts:

The New Testament writers remember the shape of this story which we treat, with no little cause, as incomprehensible.  The Gospel writers let it ring out in the words of Jesus—that he “must” go to Jerusalem notwithstanding the indignant protests of his disciples that he remains safely with them.  For his part, St Paul lets the Romans and the Jewish leadership off the hook for the crucifixion.  Paul intimates that it is God who handed Christ over.  Even in the final apocalyptic vision (Revelation 5:6) which makes up our New Testament there is, at the centre of the heavenly throne, this slain sacrificial lamb which God has provided.

The story of the Binding of Isaac appears to us here in Genesis almost in the form of “building materials” which we cannot yet conceive as being part of a finished edifice or dwelling.  They are shocking in their rawness. Until we have struggled with them and have seen them fitted into some larger structure they must remain for us highly troubling and deeply unsatisfying.