What do you intend to do about it? 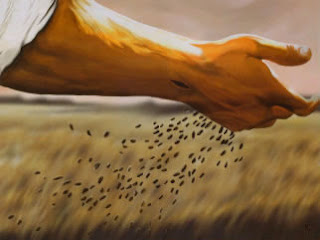 The old archdeacon I was apprenticed to in the early 80’s was critical of sermons preached by students and young clergy.   Too few of them, he complained, ended with a clear task that men and women could get up from their pew and immediately do afterwards.  Folks, he said, needed to hear an instruction – some practical ending to what would otherwise be an overlong and rambling sermon.  Get up.  Do this.

In Sunday’s Gospel, Jesus is preaching from a boat a short distance from shore.  He tells a story which we all know well, about the sower who went out to sow his seed in the field.  Some of it landed on stony ground and withered away, some landed amongst thorns and the young plants were smothered by the weeds and some seed landed on good ground where it eventually grew and bore an enormous harvest.

Pay attention, says Jesus.  And that, really, is the only command.

Sunday school or Lunch Bunch teachers amongst you may correct me but the children’s lesson on this generally has an implied command in it: “So go and be good ground”.  If you read carefully though, especially the intervening part between the parable and explanation which the lectionary left out of our Sunday reading (Matthew 13:10-17), Jesus doesn’t seem to insist that people change the sort of ground they are.   He wants to find good ground.  He wants to find those who will listen and accept and seems willing to leave to one side those who will not.  It seems harsh but there is, in fact, no Get up or Do this anywhere in the parable.

It is perfectly okay for you to be bothered by this.  You wouldn’t be the first.

It’s precisely this anger that the congregation in Nazareth feels when they hear from Jesus that God has always presented his promise to whomever was willing to accept it and run with it, even if they prove not to be you who are sitting here in the synagogue at Nazareth – even if you end up being left on the side-lines (Lk 4:25-27).

It’s what the Pharisees and the religious leadership, with steadily rising anger, heard him saying as well – that the publicans and the harlots were getting into the Kingdom before them (Matt 21:31), and that God could raise up children of Abraham from these stones if he wanted to (Matt 3:9).

It’s what Nicodemus heard Jesus saying about the wind of the Spirit “blow(ing) where it will” (John 3:8).

The Church remembered the parable of the Sower—this parable-without-a-command.  The reason it’s there in Matthew, Mark and Luke is that the Church is here being given an instruction to go forth and present the Gospel to those who will listen.  It points the Church out beyond those for whom the promise of salvation is one of a number of lifestyle options, or a bit of family or national inheritance, to those for whom it will become very life and very hope.

The anger of the Nazareth synagogue, at the stark reminder that Good News is for those who will receive it, leads them to strike out against Jesus.   That same starkness, on the other hand, which Nicodemus perceives about the very same content, leads him to show his hand and enquire of Jesus - desperately even - in the dead of night.

So yes – in the long run I suppose we have some choice to make about what we will do with the starkness of the parable and its sometimes frightening content.

If this parable of Jesus angers you –
if it frightens you –
then you have indeed heard it.

Now what exactly do you intend to do about it?