What part do you choose to play?

Why choose this one and not that one?
Why take the fork on the left and not the right? 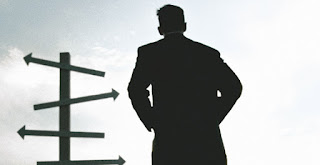 Perhaps you are impulsive.  Your spouses, your parents and colleagues regularly bemoan the fact that you never think before you jump.  Others among you in our little congregation are the sorts of folks who will brood, bellyache and dither for eons before committing themselves to a course of action.  Maybe you are averse to risk.  Others must take up the slack and put themselves on the line.

In the Letter of Paul to the Ephesians, the writer encourages his readers to forge a path ahead in ambiguous circumstances as a minority community.  “Try to find out what is pleasing to the Lord”, says Saint Paul.  In 1st Samuel the prophet is told to choose a King for Israel from amongst the many sons of Jesse.  In both cases the right choice will appear alongside several options and requires discernment.  Discernment is more than fighting your own character and its inclinations.  That you are cautious or impulsive by nature matters less than you might think.  God can make use of either tendency.

What is more to the point is this:  Are you your aware of the larger story into which your choices fit?  Paul’s words to the Christian community in Ephesus about forging a godly life in the midst of a hostile society and God’s words to the prophet Samuel about the anointing of a new king for Israel are not about how these people should maximize the quality of their lives for personal ends.  They are about fulfilling their unique role in God’s plan for the nation and the world.

Are you consciously a part of that same story and one of its characters?  Are you fulfilling the call of a member of God’s family, God’s Kingdom and God’s church?  Does the larger dimension figure into your decision-making process?

Decisions would be easy if we could narrow the scope down to ourselves and those closest to us.   I too have children and a grandchild.  The part of discernment, however, that presents itself in this Sunday’s first two readings, however, is suggesting to us that the decisions we make about our careers, our retirement, how we spend your money and how we nurture the education and direction of your children should include – must include in fact – the dimension of how we or they will be of service in the world and as a part of God’s family.

This is not a great year for human beings.  The world has become an uglier and colder place.  In such times and places God has always called and willing servants have kept the windows and door of their hearts open to hear that call and find their place in the healing of nations, the creation of community, the work of worship and the lifting up of subtle alternatives to power, exclusion, alienation and suffering.  Look around you.   That you are needed goes without saying.  Ask yourself what God is doing.  Ask as well what part you might play in that work.