If anything, God gets us!

Some things belong to you – moveable and immoveable goods.  You’d call these things your property.  They’re listed on your insurance.  There are also things which you don’t own but which are “your baby” nonetheless – processes at work which you got rolling, an article you’ve written, an idea, a recipe, a piece of music, even, which you created that you consider yours.  Then there are those things which you’ve been given to care for and to manage – the family fortune, the company secrets, the charter of the Association you belong to.  Whether or not any of these belongs to you, you still have some sense of ownership over them.

From time to time you might pause and ask yourself what “property” consists of, really.  Your name may be on the title deed but you’re only one of a series of people who has lived at 246 Elm Road across the span of a century.  You’re here and then you’re not.  And notwithstanding intellectual property laws, can anybody really be the proprietor of an idea?  These ideas of ownership don’t stand up easily in the face of a steady gaze.  Not when we are just dust in the wind.

Nicodemus comes to Jesus as an owner, supervisor and gatekeeper of Israel’s religion.  He doesn't own the religious tradition but he’s certainly one of its chief stewards – one of its guarantors, one of its border guards.  Israel’s religion is his baby.  He comes to Jesus expressing both a genuine interest and at the same time a guarded caution about what Jesus is doing.  We think you’re one of us, he tells Jesus.  God must clearly be on your side given what’s happening around you in your ministry.  Is Nicodemus, speaking on behalf of official Israel, offering Jesus a franchise?  If so, why has he come at night and in secret? 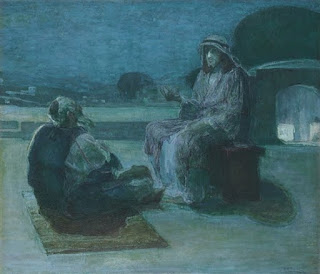 As a religious expert and arbiter Nicodemus could be said to “get” the whole concept of God and to be the “go to” person for questions of law-keeping and belonging.  He has been chosen, trained and has risen in the estimate of his fellows but, even in this quite friendly night-time meeting, Nicodemus would presume to stand in Jesus’ presence as one able to include or exclude this itinerant rabbi from the mainstream.   And this is where Jesus stops him in his tracks.

God crosses the centuries.  Nicodemus must know that.  The spirit of God moves here and there.  God speaks to whom he wishes.  Our drawing of circles around ourselves and our communities, our dividing up of religious resources and our “proprietary” attitude towards the story of God does not make us willing participants.   No, Nicodemus, you don't get God - you don't draw a circle around him.  He's not your possession or something which you claim in the name of your tribe.  We are not proprietors of God's Spirit.  Instead, we are the ones who follow the movement of that same Spirit.

If anything, God gets us.