The unfolding story of God in small spaces 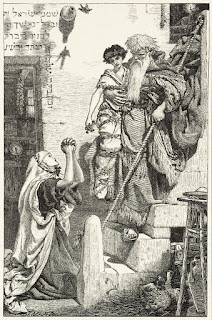 Two sons are clutched from death and restored to their mothers.  In much of the Christian world these readings will be heard on Sunday by contemporary mothers sitting in church pews who would cut off their right arms in order to see their sons thrive, prevail, succeed, recover or even to continue to live.   We owe these contemporary women a debt of thought:  In no way is it assured that the good things in our Sunday readings which took place for those boys and their mothers will happen to them, who have muttered endless prayers to God and Jesus about their sons.

They are good boys who don’t deserve the things which have landed on them from outside.   Nor should their sons be defined by (or blamed for) every impulse welling up within them and causing them and others grief.  These women know the habits and all the warm human smells of their boys.  They have picked up cast-off garments and even clutched them for a moment – counting themselves lucky to be in contact with an aimless bit of the lad which he has thrown aside.  Some administrative marvel out there will have done the maths and pointed out the unfairness of Elijah landing in the house of one poor widow with an ailing son in a land filled with sickness and deprivation (cf. Luke 4:25-26?).   What about any hypothetical funeral procession held earlier in the day in Capernaum – a procession which Jesus and his disciples did not happen to encounter?  What about that mother?

At coffee time the preacher sees the woman coming over to speak - her lips already pursing with the anticipatory “Wh” of the word “Why” or perhaps more correctly “Why not….”

What makes the preacher’s knees weak at this point as the distance between them narrows?  Who has been let down, and by whom?  Is an apology in order?  On whose behalf would one apologize?  On God’s behalf?  In the sermon which has just been preached the unfolding story of God touched down twice in small spaces in Israel.  A rivulet nourishes the modest patch of land which it waters.  The voice is heard as far as a voice might carry through the air.  Elijah will lodge in the small northern hut where he’s been commanded by God to take refuge.  The itinerary of the Son of man will connect with a limited number of folk in the villages of the Galilee.  If you must apologize, then do so on your own behalf who are part of a body which is worldwide and universal and which, in many places, still has the ear of legislators.  Do so on behalf of the church which has lost touch with the Acts of the Apostles and with the Great Commission and will not take current account of the miracles and acts of love of her saints over the centuries.

We will not unravel the mystery of innocent suffering in a few words.  Nor, however, can we excuse our default position which would seem to be that there exists a great Wheel of Fortune which crushes as it will unless Jesus or Elijah declares a holiday by his very presence.

There’s nothing we can do.
The coin will land head or tails.
The market will have its way.
It has always been thus.

We do not accept that the baton has been handed to us to work for the healing of small spaces.   The evangelical logic of Jesus and Elijah taking the unfolding story of God into small spaces is that it is the desire of God to heal and to restore, to forgive and to build up and that the Church as Christ's body will do the same.  Would that same logic not propel men and women to take their place in the ongoing work of health care (including mental health care), of education, in the forming of just societies and the reform of criminal justice - ultimately in the relief and restoration of sons and daughters who are at risk?

And, while I'm on the subject, have we even been to this woman's house?