What does your faith cost the rest of the world? 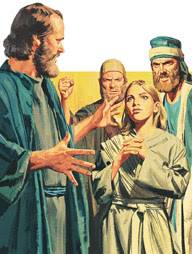 …as we were going to the place of prayer, we met a slave girl who had a spirit of divination and brought her owners a great deal of money by fortune-telling. While she followed Paul and us, she would cry out, "These men are slaves of the Most High God, who proclaim to you a way of salvation." She kept doing this for many days. But Paul, very much annoyed, turned and said to the spirit, "I order you in the name of Jesus Christ to come out of her." And it came out that very hour.
But when her owners saw that their hope of making money was gone, they seized Paul and Silas and dragged them into the marketplace before the authorities.

You’ve probably heard a sermon or two asking whether your Christian faith has ever cost you anything.  This Sunday’s reading from the Acts of the Apostles opens the door to another question, though:  What has your faith cost the society around you?

The Romans expressed everything from mild irritation to outright persecution of non-Roman religions.  They could not countenance the Jews with their Sabbath, for example.  To what end is it worth having a slave, an indentured servant or even a business partner of the “Hebrew Persuasion” who insisted on taking one perfectly good day out of the week and refusing to work on it?  A slave you could always beat but some would gladly endure a beating for the sake of their Sabbath.  And these Christians with their refusal to do their patriotic duty by sacrificing a pinch of incense to the Genius of Caesar on the small altars set up in front of public buildings!  Religious fanatics all of them and not to be trusted.  A drain upon public solidarity.  Roman society was, in the main, conservative, pragmatic and mercantile.  Nothing wrong with peace, order and good government and at the same time making a little dough in the ordered space that a well-managed society offered you.

Saint Paul cast out a “spirit of divination” from a little slave girl who was following him and his associates throughout the city of Philippi.  It’s what you would expect a follower of Jesus to do.  In this case, however, the little girl’s fortune telling was a source of considerable income to her owners.  Her healing cost them something and the enduring presence of Paul and his associates in Philippi and even more so later in Ephesus (chapter 19) promised to threaten the local economy by freeing men and women from their magical practices and their idols.  It undermined their loyalty.

Not many of you have a “spirit of divination” which might cause alarm and concern to your pastor or to the members of this parish.  But as men and women redeemed by Christ and called from the world into the family of God you have a competing loyalty which might, could, should or even must cause you to consider how you make and spend your money, how violently you climb the ladder of success, how you relate to your employer and your employee.

Your school, your business and your political party need to be put on notice.  God has his claws in you.  You are no longer a company man.