Are you in Clermont over Christmas? Or are you somewhere else with your friends and family?

And what are you expecting?

An image: Two women dressed in vaguely middle-eastern fashion clasp each other in an embrace of joyful friendship. Some artists have portrayed one woman as being older than the other or one woman more advanced in pregnancy than the second (who might not yet even seem obviously to be with child). In the picture one woman might be regarding the other with greater honour. Even if the painting were not labeled, anyone familiar with Christian art and iconography will immediately think of the Visitation - the visit of Mary to her cousin Elisabeth (the mother of John the Baptist) and Elisabeth's salutations to Mary: "Blessed are you among women, and blessed is the fruit of your womb" and "Blessed is she who believed that there would be a fulfillment of what was spoken to her by the Lord". 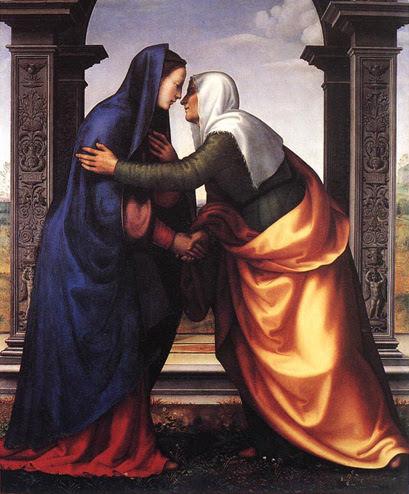 You brought that box of Christmas decorations upstairs from the basement. You adorned your house "as it was" with something new, something seasonal, something pretty which you will take down and store again in the cave. The house goes back to its usual state. Isn't the Universe an elastic place?. It can be stretched into a new shape. It is capable of novelty. But at the same time it has an amazing ability to return to where it was and to leave no shed of evidence of ever having been different. This is not a modern reflection: men and women have been disappointed before with changes they were promised by others or with the changes which they themselves had promised to turn into a reality in their own lives.

Every Sunday we say, in our Nicene Creed, that God is Incarnate - that in one unique moment in history he took upon himself human flesh through his earthly mother and joins us where we are so that life could be changed in such a way that it does not slip back. From the author of the Epistle to the Hebrews to the testimony men and women you know yourselves, there is abundant witness to the power of God to change willing lives beyond their bounds with power and with permanence. Listen! Engage with the promise of God. Go to Bethlehem this Christmas with your prayers and your thoughts. Elisabeth cries out to Our Lady that she is blessed because she has believed what God has promised. The message to human beings is nothing like the adornment of what already is. It is substantial hope for what has not yet begun to be.

Your lives need never be the same