The Lord answered Job out of the whirlwind

Then the LORD answered Job out of the whirlwind: 'Who is this that darkens counsel by words without knowledge? ........Where were you when I laid the foundation of the earth? Tell me, if you have understanding.' 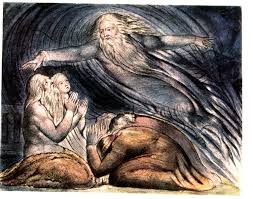 Have you ever been answered out of a whirlwind? You are talking to somebody on the phone. In the background you hear the tapping of a keyboard. The person you're talking to is multitasking. This bothers you. You are dragged along the hallway by a superior between his two o'clock meeting and his two-thirty as he tries and deal with the question you've asked him in the space of fifty yards of badly carpeted corridor. You feel cheated and undervalued.

This is true. You are.

You're right. Your complaint, question or issue is not getting the time it deserves. But then again, he is right too. The world is a big place. It contains more than just you.

Does any of this apply to poor Job in his complaint to God about a missing family, the boils on his body and his many other misfortunes? Well, frankly, no. The analogy is a poor one, were it not for the fact that the people I know who have completely valid complaints (the cancer has returned, the job has worked out badly, the kid has been caught smoking dope, the divorce papers have arrived at the hand of a burly and unpleasant bailiff) these folks do, nonetheless invariably stop paying attention to the world beyond the awful one they live in.

Can they articulate their complaint clearly? Yes, of course they can. Is it a palpable reality? Most probably, yes. Dreadful things fall on people from a height. Awful things hit the fan. Pitfalls abound.  Nonetheless...the greatest injury done to grieving people, to people besieged by troubles or stresses, is that their world shrinks to a point. And, as difficult as it might be for any such a person to conceive of being pushed beyond the circle of grief and dis-ease in which he takes his place, it is precisely that to which God points us out of the whirlwind - the great big world around us where God is stirring the pot.

Praise him.   Praise God for "...his excellent greatness."

In our grief he brings to us something which is not us:  the world - big and beautiful and turbulent and above all - still and always - the dwelling place of God.