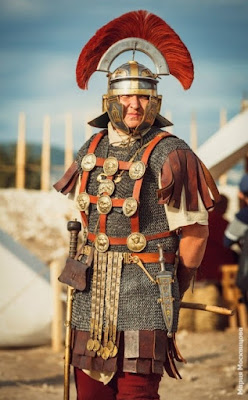 The Roman Centurion in this Sunday’s reading from Luke’s Gospel is what my wife Caireen would call “a very concrete thinker”.    Rank-and-file Roman troops in the area would have been Syrian or Egyptian auxiliaries.  Anybody who enjoyed a Centurion’s rank, like this man did, would likely be a real Roman from the Italian peninsula - “not from around here” in other words. As a foreigner (a European even!) and a gentile the man works hard to obtain a hearing from Jesus the itinerant Jewish healer.  He is organized.  He sends friends - worthy local Jews - to establish his bone fides as a friend to the Jews and a benefactor of the local synagogue and to set forth the case that a beloved slave has fallen ill and is close to death.  Will Jesus heal the slave?

It’s what happens after Jesus says yes that should give us pause.  Having worked so hard to obtain a hearing he then seems to put the answer to his request at risk by saying that it’s not actually necessary for Jesus to come to his house to effect the healing in person.  All Jesus needs to do is to give the word and it will, as a matter of course, be done. Do we confuse the man’s optimism with naivete?   We shouldn’t.  A naive person knows less than he should.  This man knows more and Jesus affirms what the Centurion says.  I know how it goes, he’s saying.  I’m in the army.  The Tribune talks to the Centurion and the Centurion musters together the Optios and the thing is made to happen.  Jesus marvels at the simplicity of this all - this is what faith is, he says.  This is what I’ve been talking about.

We did most of the hard work while we were still in our sins.  Then we released ourselves into the hands of God and he does what he says he will do.  Thus he adorns the flowers and cares for the birds of the air.  Thus does he forgive sinners and lead the wanderers home.

It’s supposed to happen this way.  It happens, in fact, all the time.