Paul and Silas in prison 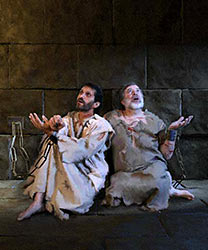 The reading from the Acts of the Apostles this Sunday indicates that the ministrations of Paul and others to the Greek-speaking towns of Asia Minor (now Turkey) was a cause of concern to the Roman officials and the city fathers.  They weren't overly and obviously worried about the truth or untruth of what the missionaries were saying (what is truth anyway?).  These city fathers did have an investment, however, in civic and social peace and in the ongoing commercial life of their community.

The official existence of shrines and the legitimate offering of worship and loyalty to local pagan deities was important to the Peace Order and Good Government of the city.  The unofficial existence of fortune tellers, soothsayers and magical healers in the marketplace was no bother and provided entertainment to the citizens and a source of income (and ultimately tax revenue)to certain members of the community.

It quickly became obvious to these officials that the Christian missionaries preached a Gospel which had a dramatic effect on the loyalties of people towards their families and their former ways of life.  Far from being a passing fancy, it exerted its authority over the way people related to their families, to their communities and to the way people earned their daily bread.  It produced a top-to-bottom transformation in groups and individuals and, so, threatened to destabilize the coherence of the city.

It needed watching closely.  Where it pulled people out of useful alliances which generated much needed revenue it needed to be opposed.

We keep all the different sides of our lives turning over simultaneously.  We are members of the church *and* family members *and* participants in the political process *and* employees or employers.  We might sincerely hope there is nothing about the way we earn our crust which stands in polar opposition to the call of the Gospel.

At the same time, however, shouldn't we be a bit more curious about the way our forebears understood the call of the Gospel to be "primary" and allowed it to have an effect - even a quite dramatic one - on the way life was lived in the city and at work?