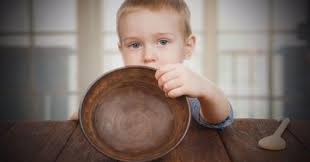 It's fair to say that our tastes change over the years:  Witness any picture of your father or uncle at some point in the 1970s.  Where did those plaids and tartans come from?  We wouldn't be seen dead in them today and cannot imagine what aesthetic need such disasterous garments filled.
In like manner, the things we "hunger for" change as well.  With a little luck (or more properly, Grace) we begin to yearn for things which feed the soul as well as the body.  Our needs become tailored and modified.  We find ourselves responsible for a family and not merely ourselves.  We begin to occupy a position of trust within a company or a community and the needs of our own proper persons must take second place to the enterprise or the community we serve.  It is all on the trajectory of reasonable maturity.  We grasp less and give more.

But not always. We don't all mature at the same rate.

Some people believe they were cheated (they might say) out of the things they needed when they were small.   They live into their dotage taking the lion's share of what is on offer for themselves and being miserly in their giving back to others around them.
"A shame about so-and-so" we might say.  "He's got a hunger gnawing inside of him which just won't go away."

Even those of us - who haven't particularly made a name for ourselves by being grasping and self-gratifying - still arrive at a point where we begin to question the ends to which we have been working.

It is not an uncommon passage for a man or woman to arrive at in their forties or fifties where they begin to wonder if they've been working for the wrong things, striving to make it to some "point" which now no longer seems to satisfy.

It may be bread - our crust - that we're working for but it's not the True Bread.   It's a garment that may need to be hung up in a back closet somewhere - something that had its day and needs to be replaced.