Something new and better 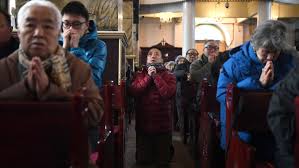 The congregations Paul visited and wrote to were often quite mixed gatherings:  Those with a background in Judaism were thrown together with people from gentile backgrounds.  Wealthy (or at least comfortable) citizens in the congregation counted themselves fellow members with servants and slaves.  Foreigners mingled with locals.  The leadership of women was acknowledged to a degree which made non-Christian onlookers uncomfortable.

In such a mix there is a tendency to quietly wonder who makes up the "core" of the church and who is "outside". Some of the controversies lurking behind the New Testament letters stem from just such an attempt on the part of one group to establish themselves as the earlier or better members of Christ's flock.

Paul's words to the Ephesians remind us that our backgrounds, our national identities, our personalities and our individual attributes are merely the raw material from which God creates something new and better.  As individuals we not as important as what we will become when we are gathered together with people from the other side of the railway tracks.