A Sermon on the occasion of 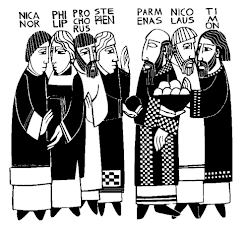 My text this afternoon is from the 6th chapter of Acts, verse 3.

"...pick out from among you seven men of good repute, full of the Spirit and of wisdom, whom we may appoint to this duty"

We’ll be naming you a couple of times today.  We’ve checked the spelling.  Bishop David will address you by name.  Your names appear on the booklet everybody has in their hands this afternoon.  An announcement has gone out on Facebook in which you are named.   Not only do we state your names – in the presentation of the candidates to the Bishop today - we’ll also outline what you are about to do – the work to which you are being appointed.  Your names first:

They are:  Martin, Robert and Valdis

Luke has seen fit to tell us the names of the seven deacons appointed in Jerusalem:  Stephen, Philip, Prochorus, Nicanor, Timon, Parmenas and Nicolaus.  We also know the work which had been foreseen for them.  I’m not completely enamored of the wording used here. Name and position.  I balk a little bit at the language and I thank God for the Liturgical Commission of the Church of England that we don’t word things in quite the same way – not in the Bishop’s charge to you this morning, not in the formularies of the oaths which the three of you took in front of the Diocesan Registrar and not in the words of the ordination service itself.  We haven’t flown you in or had you drive to Rome from points north in order to say that you are going to do work which your chaplains frankly don’t have time for or can’t be bothered to do or feel is somehow below them - which would seem, at first glance - to be the spirit in which the deacons from Acts are tasked with their specific roles.

“It is not right that we should give up preaching the word of God to serve tables. Therefore, brethren, pick out from among you seven men of good repute...."

Now, in fairness, you will complement the character of the chaplain you work with.  Yes – we hope you will.  Each of you and your chaplain have different valences and there will be tasks and areas of ministry to which the three of you are better suited or at least “differently suited” than your supervising chaplains and so I imagine that you will divide the work up on the basis of inclination.  Of course.  That’s the joy of having more than one bod in the house.  You’ll do that with your own curate someday, perhaps.  It makes perfect sense.

It jars, though, to see the role of the deacon described as one of “waiting on tables” where such activity is judged by the apostles to be beneath their station.  We could be a bit cheeky and might add that it jarred the Holy Spirit rather more.  The progress of these very same Deacons ended up being entirely other than what the Apostles foresaw.  The hand came quickly out of its appointed glove, didn’t it?  The shoot burst forth from its seedcase, the fish grew legs and evolved out of its designated pond almost immediately.  Not because of an epiphany about tender or equitable workplace language on the part of the Apostles but because the world changed dramatically and immediately around them.  The divisions in the Jerusalem church between Aramaic speaking Jewish Christians and Greek speaking Jewish Christians which opens chapter 6 of Acts did nothing but deepen following the stoning of Stephen – who was stoned by the crowd not because he got a table order wrong but because he preached a magnificent – though overlong - sermon and named the elephant in the room.   He took his place in a venerable tradition of stating that notwithstanding the presence of a Temple in Jerusalem, God does not dwell in a house made by human hands.  Sharpened by the emergence over a hundred years of a large Greek speaking Jewish diaspora living elsewhere in the Roman Empire, far from the temple, sharpened by the perennial decline in the integrity of the Temple leadership but ultimately, for the early Christian movement, by the fact that God has lately drawn near his people definitively and absolutely in the person of Christ which made this particular confection of stone and cedar wholly redundant.

The persecution which followed the stoning of Stephen was not evenly applied.  In the chapters which follow, the Apostles remain in Jerusalem while our new deacons and others from their branch of the Church are cast throughout Samaria, Phoenicia, Antioch, Cyprus like seeds upon a ploughed field and become one of the engines of Christian mission.  Waiting tables?  I think not.  Says God.

So here are the best laid plans of the church – the technical requirements of your formation and education.  Tick.   The choice of the church – practically the recommendations of people you have worked with, of your mentors, of a Bishop’s Advisory Panel and finally the question Bishop David is going to ask the assembled congregation a little later on.  Do you agree?  Will you accept?  Tick.  There is, further, the reasonable expectation that you will work within structures which may more or less suit you for the time being….

….but then there is what we have come to know with certainty this last six months – that there is no certainty – that events intervene, that underrated skills become crucially and suddenly important.  The health emergencies of the recent past may continue.  They may deepen.   Political emergencies of the quite immediate future may dwarf what we have seen in the past six months.  There is economic uncertainty surrounding the daily work of our parishioners – how they earn their crust.  These along with the economic uncertainty facing the church writ large and the church writ small will undoubtedly change the question “what will these three men do?” and “what will be their legacy in the economy of God”. What the three of you will say, in your dotage, that you did in the years of your ordained ministry is one of the things Bishop David does not know and which we cannot possibly know.

Firm plans.  God loves the sound of firm plans.  He loves the sound which firm plans make when they are beaten against the harder surface of necessity or when undervalued skills become the essential currency of the new order which God ushers in or at least navigates or positively seizes as an opportunity.  Be good curates where you’re sent.  But be good soldiers in battles as yet unseen.  You are being ordained with the greatest certainty that you are people of good repute.  That you are wise people.  That you have amassed about you a degree of circumspection, of knowledge of how people tick, that you are capable of knowing your place within structures, that you can work on a team where there will be people in your charge and where you are in the charge of others.  But you are being picked out as people who have an acquaintance with the ways of the Spirit.  You are being ordained not only in the certainty of what we believe we know but in the hope that you will be up to the challenges of the Spirit of God in an age the exigencies of which we cannot possibly imagine.

From the Joseph Cycle in the Book of Genesis to the progress of the servants of God in the Acts of the Apostles to the vision of the saints gathered around the throne in the Apocalypse of St John in the final book of the Christian Bible, God will be faithful to his promises.  In good times and especially beyond the margin of what the most organized ecclesial entity can promise or predict – in what we might regard as bad or chaotic times, God plants his people where he needs them – where they can nourish the other – where they can speak the timely word of Grace where it is required and we can all only wonder how and that it all worked out as well as it did.

In answer to the questions in his brothers’ eyes about how the boy Joseph could have survived the cistern into which he was thrown, the Midianites who purchased him, how he could have endured the wife of Potiphar and survived an Egyptian jail, Joseph replies

"God sent me before you to preserve for you a remnant on earth, and to keep alive for you many survivors. So it was not you who sent me here, but God;"

Paul and Barnabas, preaching in Cyprus, work a field already prepared beforehand when our remaining deacons fled Jerusalem at the peril of their lives along Roman roads and preaching in the Greek language and they could not have known any of this in the midst of their flight.

In answer to his own question

"Who are these, clothed in white robes, and whence have they come?"

“These are they who have come out of the great tribulation; they have washed their robes and made them white in the blood of the Lamb.”

In the name of the Father and of the Son and of the Holy Spirit.  Amen