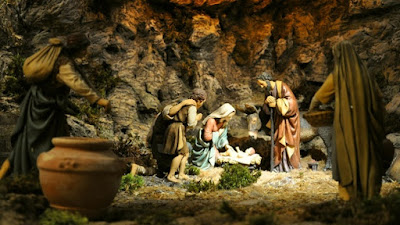 And the Word became flesh and dwelt among us.

I’m glad to be gathered with you this evening for this community’s first Eucharist of Christmas this year and my first Midnight Mass with you as Vicar of All Saints’, Rome.  Some of you have been here before at Christmas.  You can probably tell me how it’s done, what I need to say next in the service and where I should be standing,

and I would do well to listen.

Some of you are here quite regularly throughout the year.  I know your names and I have your numbers on my phone or in my book.  Someone is no doubt here for the very first time.

I won’t ask you to put up your hand.

I am blessed with two fine interns this year at All Saints’ – young adults at different stages of “approach” shall we say to the eventual practice of ordained ministry in the Anglican tradition.  One of the things we hum and haw about in the Sacristy, as I pass on my eleven acquired pieces of wisdom, is perhaps relevant to tonight’s sermon.  I should tell you about it.  I have posed the question:

What is it that people expect from a Church service?

We’ve spoken about it generally in terms of ordinary church services here at All Saints’ but tonight I should pare it down to why we’re here this evening.  What do folk expect of a Christmas Eve Midnight Mass?

Were you to suddenly ring the intercom late at night and startle me when I’m still in the office I might reword the question back at you through the intercom quite ardently:

Who are you?  What do you want?

When I was an intern, the old Archdeacon who was supervising me would look down his long red nose and tell me never to assume people did things out of a sense of duty or came to church out of habit.  They come, he said to me, because they’re looking for some Word and Jim McLean’s use of the singular was something he used advisedly.  He could have told me that people are looking for certain words – plural.  The right words in the right combination in a sermon which gives me then, as the preacher, an athletic task to perform, a riddle to figure out and rather a lot to do - in a risky place -making sure I say just the right thing from the pulpit.   Or else.

Perhaps the words are in the Mass itself.  You appreciate – or don’t - that the language we use in our Communion Service tonight is the more venerable language of the Book of Common Prayer but even if we were using the modern language of the Common Worship book we’d be doing it with reverence and solemnity and would not likely make or break the service for you based on our choice of words but still you might prefer this.  These are the words you’re looking for.

We sang different Christmas carols at 5 pm today and we’ll sing yet others at our 10:30 service tomorrow and so there will be one of your favorite Christmas carols which is missing tonight.  But you’ll live.  You can come back tomorrow at 10:30 or you can send me an email in November saying that you hope we include In the Bleak Midwinter next Christmas Eve.  Those were the words you were looking for.  This year we left them out.

If it’s words – plural - that you want, then that gives me something I can get the interns to do.  They’re eager to do well.  They can stand at the back of the church at the end of the service with survey sheets.  Please tell us if you found our service to be what you were looking for tonight – did it have the right words - was it too long or too short, too much incense or too little, too few guitars and tambourines or too many, too long a sermon or too short – too chatty or too formal.   With some effort and planning we can get it right next year – servants of the opinions our congregation happen to evidence this year as to the cluster of words they are looking to hear

If, however, it’s a Word – singular - that you want, then to some extent I, and even the hapless interns, am off the hook.  It’s our job to present an attractive service recognizable to the whole Church in its Western tradition, with a sermon that’s had some thought put into it and which relates more or less to the readings, a bulletin which can be followed and a warm welcome.  At which point we, then, stand to the side and we get out of the way because the Word – singular – which people are expecting to hear is not in the book, not in this Eucharistic Prayer compared to that one, not in this Christmas carol more than in that one there on the bulletin which I’ve never liked.

The Word – singular – which some people are hoping to hear tonight is, in fact, within them and was in them in some form as they wandered down Via del Babuino this evening and will be repeated in them as we exchange the peace later on and when their child or grandchild takes their hand in the last verse of O Come All Ye Faithful and will repeat at some point during Christmas Lunch tomorrow.  It’s not our word – we have no proprietary rights over it.  It enters the hearts and lives of people subtly or mysteriously and is only tangentially related to anything we speak or sing or pray here tonight.

The word “go” starts you off on a race.  During the “ready” and the “set” you’re concentrating your forces, looking down the track in front of you, taking quiet note of the opponent to your right and to your left. The word you’re waiting for is the word “go” and nothing else – short of maybe a gunshot - will do to get you running.

If you’re a child and you’re teasing a sibling it’s the word “stop” which you are expecting will come your way eventually from the sibling who’ll thump you if you don’t stop or a parent who will sit you on the naughty seat.  In the lead-up you’ll continue to push the boundaries just one smidge more until finally you hear the word you expect to hear which is “stop”.

How would you define this Word – this word which old Archdeacon McLean told me that folks were looking for in church?  You’d use metaphors, perhaps, which don’t necessarily refer to spoken language:

It would be like a wind which filled my sails and got my becalmed boat going again after a period of stasis which had lasted years.

It would be like a hand placed on my shoulder which reminded me that I wasn’t alone and that somebody cared for me and was beside me.

It would be like being lost on a dark trail and imagining that it would be dark forever and then seeing a glimmer of pink light on the horizon and realizing that I wasn’t imagining it but that the dawn would eventually break and glorious day would come in due course.

Is the term “Word” even appropriate?  Doesn’t that assume that people are missing information or data and that we could ask the interns to ask the following question on their survey at the back of the church:  what information do you feel you are missing which prevents you from living a happier, more productive and more hopeful life here in Rome or at home in Stoke-on-Trent or Badger’s Elbow, Nebraska?  What can we say here at All Saints’ to make this all better?

To which you would respond:  Listen up, silly Intern.  Ask that Vicar of yours how he could possibly have misunderstood so badly what it is that I am looking for?  He was closer a moment or two earlier in his sermon with the bit about wind, and the physical pressure of a hand on my shoulder and with light glimmering on the edge of the dark horizon – the presence of a dynamic force acting on inertia, physical pressure indicating the presence of another person and the possibility of a new day and light in the midst of darkness.  But never information, no, and not a handful of words.  That’s not it at all.

The germ of the Christmas message is not that there are words and ideas and that a single word might represent a single thing and it is not the grudging recognition that life is fleshly and physical and therefore frail and vulnerable and subject to decay and death and contingency.  That would be same-old-same-old and no news to anyone

that in God’s will and economy, The Word Becomes Flesh and Dwells Among Us.  If this is still too theoretical in the present tense then put it the way John put it in his Gospel:  The Word Became Flesh And Dwelt Among Us.  In history – in the real world – in the same world you live in and in the flesh that you bear upon your very own bones.  In that flesh Christ caused humanity to work the way it was supposed to, accomplished what we could not, showed us how to do it and gave us the possibility of and the power to live differently than we do.

God draws close to us in love.  The humanity we suffer with – our own humanity is like that becalmed boat.  That boat was built to move and to sail across the sea and to get you from one place to another.  It can and it will.  With God’s wind in your sails you can and will move like the wind.

You were not meant to live alone and without friendship and assurance.  God draws close to us in Christ – beside and not above us – and reminds us that he is with us.

You were not meant to live without sight, without hope and without a forward path.  It is unnatural that we should be without insight and without hope.  The promise of light and direction draws shepherds from their fields, it draws Wise Men from the East and contemporary people to the open Bible on their laps, to the altar rails of their local churches and to the open door which is a quiet moment of prayer at a chosen time in the day or even a muttered prayer at bedtime.

Every instant bears with it the possibility of complete and utter change.  Take this then as an invitation:  At the service of Nine Lessons and Carols the officiant says:  “…let it be our care and delight to hear again the message of the angels, and in heart and mind to go even unto Bethlehem and see this thing which is come to pass, and the Babe lying in a manger.”

The Word Became Flesh and Dwelt Among us.  God has drawn close to us in Christ.

The two words you need to leave here with tonight are not “stop” and “go”.