The earth produces of itself.....

Jesus said, “The kingdom of God is as if someone would scatter seed on the ground, and would sleep and rise night and day, and the seed would sprout and grow, he does not know how. The earth produces of itself, first the stalk, then the head, then the full grain in the head. But when the grain is ripe, at once he goes in with his sickle, because the harvest has come.”

This is the thing we might find hard to believe when our back is to the wall. 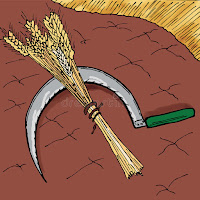 Surely the watched pot boils a bit faster, does it not?  We ask the question a half-dozen times to make sure it’s been understood because, after all, there is no shortage of idiots in the world.  We hover over our children as if each inch of their forward progress were dependent upon our total concentration.  With little to worry about we would worry nonetheless.  True, though we might meet people who should fret more than they do.  But not you who are reading this.  No, not you.  And not me, either.  Likely not.  We could do with letting the words of this parable flood over us.

The mystery of the Kingdom of God is that God's Kingdom is within us, around us and among us

and that it works.
Jesus goes to enormous lengths, in the guise of innumerable parables and analogies, to tell us that God’s Kingdom is taking shape around us.

It is here, it is there.

It is the treasure hidden in the field, the valuable pearl nestled amongst lesser gems, the yeast in the dough and the smallest seed planted in the garden.  See how the country people and the villagers flood to the hillside to hear the Kingdom spoken of.  Look at the lame man carrying his pallet away on his very own pegs in triumph.  See the harlot, the Quisling and the outcast restored to community because the words of peace and invitation have been spoken.

It doesn’t depend on you.  So relax.  The Kingdom is not your handiwork.  You are not its chief engineer.

But relax and watch.  What remains at play is not the reality of the Kingdom but your own very self as a participant.  Will you have the eyes intent on seeing the whole thing play out?  And the ears to hear about it?

Do you want to be a part of the process?