You shall not murder. 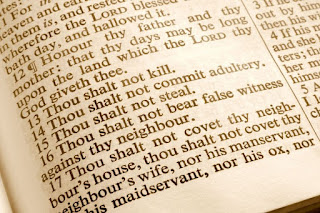 The Ten Commandments appear in the first reading on Sunday and this week our eye is, of course, drawn to the sixth of them, namely:  You shall not murder.  We'd resent it if our pastor treated the mass shooting in Las Vegas last week as something which wasn’t noteworthy.  And so, for our part this Sunday, we will publicly remember those who were lost and rejoice in the strength and courage of those who demonstrated the good attributes of humanity amid terrible circumstances.

There’s something else which vicars do at times like this, though.  You might even find it grating.  The fellow up there at the front of the church dressed like a Christmas decoration could pause in the middle of his sermon and say something along the lines of:

“We’re all a little bit like murderers, aren’t we?”

Oh Father!   Why do you clergy do that? you ask.  Is this something you learned  at seminary - to generalize everything? We are not bitter and twisted individuals who pour out rage, fanaticism or illness on others in dramatic ways.

On the face of it, yes, you are not that person.  It ought to be possible for a member of Christ Church Clermont-Ferrand to finish his three-score-years-and-ten without having transgressed any of the Ten Commandments and, certainly, not to be guilty of culpable homicide.

Give some thought, however, to what Jesus says to those who believe the bad guys to be over there and the good guys here with us on the right side of the fence.  In the verses (Matthew 5:21-30) which follow the Sermon on the Mount, Jesus addresses those who believe that they have passed and will pass their years without ever being guilty of – and here he chooses two quite dramatic commandments: adultery and murder.

Jesus sharpens the commandment on adultery to include lustful thoughts.

He sharpens the commandment on murder to include anger.

Of murder he says:

Notorious violence is when, with sharpened motives and powerful means, the content of sinful and ordinary human hearts crosses the threshold from thought into act.  Whatever it is which generates the headlines and deprives families of their loved ones, issues from the very same stuff that has made our home life painful, our relationships strained, our children bullied at school, our workplaces a nightmare and those who differ from us isolated and uncared for.

This is stuff we know inside of ourselves.

Jesus makes sinners of all of us.