On being the wrong boy.

God was with the boy, and he grew up… 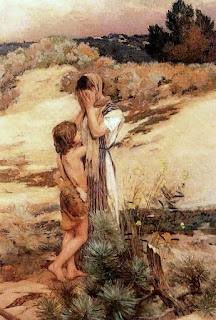 Abraham sends his servant woman Hagar and the boy Ishmael (the child they have had together) out into the wilderness to fend for themselves.  There is precious little in the story which we can point to which will make it fair and palatable. You might make a case about God being economical with his finite favour which he ultimately extends only to Isaac.  Crack on!  It won’t satisfy any natural reading of the text.   This is a story about Sarah’s will to see the “other woman” and the “other son” - both of whom have a claim on Abraham’s affection - thrown out of the tent and left to their own devices in a hot and barren land.   There is the kind of family jealousy which we might identify in our own extended family or in our own experience of blended families.  Children are sometimes banished.   It happens. They fall out of favour.  They suffer the bad luck to have been born prior to the current marriage and the favoured second batch of children.  Go through your family photo albums.  Note any blank spaces.  Ask your aunty about it when she’s had a gin or two.

You could reproach Abraham for not being able to stand up to his wife and protect the fruit of his loins.  You might even wonder that God seems to play along with Sarah in her need to throw out her competitor.  The Old Testament stories are such a mish-mash of human drama and Salvation History.  We’d do well not to divide them up.  They are what they are.

God has good peripheral vision.  He hears Hagar’s weeping and the cries of the boy sheltering in the low vegetation.

He hears the mother.
He sees the boy.
He abides with him as he grows up.

God looks sideways.  There is grace beyond the bounds and this grace-which-leaps-over-borders will find itself being worked out in the ministry of Jesus.  He started with his own but he did not end there. His commission to the saints at the end of the gospels is to take the message – that grace -  to all nations.  It’s this sideways glance and overflowing grace which Saint Paul will take with him to Antioch and to a ministry which extends beyond the chosen sons and daughters and out to the Gentiles and, through those saints, to parts of the world which were unknown.

That was a long time ago.  There is current hope in this passage for you as well who may, for any number of reasons, be outside the well-lit room and the appointed path - who must look for hope beyond the ruins of your family lives and beyond your disappointing personal histories.   You might easily list off the reasons you don’t belong in Abraham’s tent.