The pain and the promise of believing again. 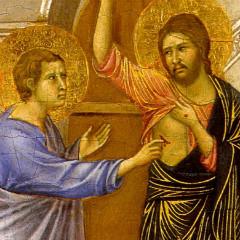 Our local paper in Victoria B.C. had a daily feature on the puzzles page where you looked at two complex cartoons and were challenged to discover at least five differences between them.  It took a bit of time but you soon discovered that the chair in one picture was closer to the wall than in the other or that the frame of a painting was slightly different in the second version.

The school friend you bump into twenty years on – older, heavier, greyer - is no longer the same young person you drank beer with at the Student Union building even though he’s the same man.   Once he opens his mouth and regales you with stories from the old days, however, there’s no question.  It’s him.

Thomas might have said that he would believe Jesus had been raised from death (and that the other disciples had not suffered a group hallucination) if he could only hear him preach, or see him perform a miracle or watch him confront the Pharisees once again.  But no, he chose to make the task nearly impossible by saying that he would insist on seeing wounds on the body of the living Christ that were incompatible with life.

Jesus shows himself convincingly to Thomas despite this harsh burden of proof.  He then chides him:  Thomas’ unbelief appears to be wilful unbelief.   Its purpose is not to establish a proper scale of credibility but, rather, to protect the wounded self (Thomas’ self) from being wounded anew.

It is no easy matter to allow hope to return when hopes have been dashed.  It is exceptionally difficult to hope for love when love has been withdrawn in living memory.  You don’t see the horizon when you’re concentrating only one putting one foot in front of the other.

Jesus’ promise of new life conflicts with our vows.  The opportunity of living hopefully again rubs up against our survival strategies.  For what seem like very good and even noble reasons we vow to “make do” with very little hope and to live a life which is tailored to making it through the year or even just to the end of the month.  The substantial hopes of the wounded disciple become nostalgic matters set in the past as is evident from the words of one of the disciples on the road to Emmaus: “We had hoped…..” or shelved away awaiting a seemingly impossible outcome: “I will not believe unless….”.

The Gospel readings in the Sundays of Easter centre around the appearance of Jesus to his disciples following the Resurrection and his invitation to them to enter the abundant life which that resurrection has now made possible.  I hope you will give some thought to those disciples – daring to risk once again and weighing, in their two hands, both the pain and the promise of decision.  Consider what vows you have made – often in response to very real conflict and disappointment – which keep you from hoping, from loving and ultimately from living life to the fullest.