When John heard in prison what the Messiah was doing,
he sent word by his disciples and said to him, “Are you the
one who is to come, or are we to wait for another?”

Between 1968 and 1971 the Coca Cola company worked on a series of advertisements loosely grouped together as the “Real Thing Campaign”.  You might be old enough to remember one of them from 1971 – the famous inter-racial song on the hillside: “I’d like to buy the world a Coke…” which ended with the refrain “It’s the real thing…”. 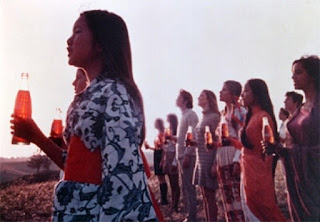 Would you know the real thing if it kicked you in the backside?  Would the “Real Thing” fulfil your expectations or defy them?  Maybe you’ve spent years yearning for something you knew so well that you could almost taste it.  You’d recognize it a kilometre away - this or that opportunity – this or that perfect person.  You’ll have fleshed out the desired thing in your imagination during sleepless nights.  It will look like this – he or she will be like that.  The imaginary thing or person or occasion or opportunity has grown quite specific.

You could draw a picture of it.

You're waiting, then, for something just like that to wander into view so that you can hop up and shout “bingo”?

Give it a sec.

You’ve built up in your mind an idea of what the real thing will look like.  You’re the one supplying its arms and legs, setting out the rules by which it will work, what it looks like, sounds like and smells like.  That might pose a problem for you out there in the real world.

I suggest that when you finally do encounter a “Real Thing” it will be a bit strange and it will be strange precisely because it’s not you.  It is not the product of your imagination.  It does not resemble your own face staring back up at you from the depths of the well.

In our reading from Matthew’s Gospel this Sunday, John the Baptist has already been put into prison by Herod Antipas.  His days are numbered and he has time to think.  He has time, even, to fret.  He sends his disciples to Jesus to ask him if he’s the real thing or should they keep on looking.  John, you will remember, has publicly recognized Jesus as God’s lamb, as the coming Messiah and as one more worthy than himself.  But he is now assailed by a doubt:  something about Jesus’ ministry has not conformed to what he, John, had imagined.  And so he needs to ask.

Jesus words are that the benefits of his ministry are abundant and obvious.  The blind, the deaf, the lepers, the lame and even the dead will all attest to its power.  Jesus finishes, however, with these words:

“Blessed is he who takes no offense at me”.

Jesus ministry will not be tamed by the cultivated hopes of either the great or the small of Israel.  You may not control the answer to your greatest desire. What comes to you from God is not generated or limited by your own imagination. Be encouraged and even delighted by its strangeness.  Discomfort may be the greatest proof that something real has entered the world—there to be met and known and followed.