Putting the seed to good use in our gardens

The apostles said to the Lord, "Increase our faith!" 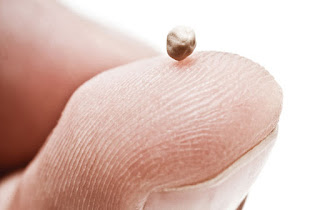 The Lord replied, "If you had faith the size of a mustard seed, you could say to this mulberry tree, `Be uprooted and planted in the sea,' and it would obey you.

Similar sayings of Jesus in Mark’s and in Matthew’s Gospels juxtapose mustard seeds with mountains instead of mulberry trees.  The phrase “faith that moves mountains” has found a home in our language as a figure of speech.

We might assume that the apostles are asking for the faith necessary to perform unthinkable miracles:  to strike their enemies dumb, to heal the one-legged at tent meetings or to teleport mountains and mulberry trees through air and water.  Are ordinary people here asking (and should we be asking, therefore) to be given superhuman powers?

The apostles ask Jesus to increase their faith.  I hear echoes of the father in the 9th chapter of Mark whose child has a convulsing spirit.  This father is asked whether he believes Jesus can heal his son.   He cries out “I do believe, help my unbelief”

It might profit us to consider the request which these people make (“increase our faith” - “help my unbelief”) rather than Jesus’ more memorable answer.

What do these people believe they are lacking?

The apostles, like the father from Mark 9, stand on the edge of a world which shows itself to be the Kingdom when Jesus speaks and acts in it.  We had grown used to seeing the world as a fixed place where the wheels turn as they must and where one thing leads inexorably to the next.  Random chance might be our best hope in seeing our fortunes change.  Jesus asks his followers to jump in with him and to see the world as the place where the sick son can be well again, as a place where we not only should but indeed can forgive our brother when he sins against us seven times and where we are now free to forswear the things which cause us and others to stumble.

The old world still grips us in its claws but you, like these characters from the Gospels, are gathered at Jesus feet and have obeyed the summons into his presence.  This is true whether you are a character in the Gospels or a contemporary man or woman who presents yourself in prayer and corporate worship to your living Lord. Are we to believe that faith, the quantity of which might even best be described as something the size of a mustard seed, is missing from us?

Or has it simply not yet been used?  It may not yet a normal tool in the conduct of your lives, in the facing down of conflicts, in your striving for justice in your place of work and in the hammering out of your path in life?

This is the threshold upon which we stand - not the possession of faith but our willingness to use it.  We have the seed in our hands.  It needs to be planted in the ground upon which we live and work.