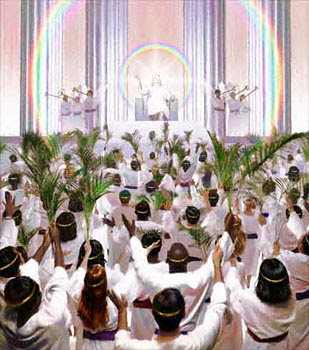 The folks at home eating Chinese take-out on folding TV tables scan the celebrities who come into view as a camera pans the crowd at a royal wedding or some other great national event.

“There's Elton John” says mum.
“Who's Elton John?” her granddaughter asks her.
“There's the former Chancellor of the Exchequer and, oh yes, that other fellow who was always on the news during the Falklands war – what's his name?'

If mum would ever just “stifle” and stop talking over the television she would be told who's who in due course. Nicholas Witchell, the BBC's royal correspondent does yeoman service filling in the blanks for those of us who need our memories jogged at great events. That's his job, after all. He knows. In the vision of John of Patmos (which we know in English as the Book of Revelation and which the rest of the world calls the Apocalypse), a heavenly elder turns to John the viewer and asks:

“Who are these, robed in white, and where have they come from?”

At first glance these figures dressed in white with their palm branches in hand who have gathered around the throne of God and the Lamb are angels or some other heavenly beings. In which case, they differ from me in their very nature. That they can show up at the west door with invitations to the heavenly event is no surprise, being born to it and all.

“John the Revelator” was possibly a prisoner in the island's salt mines when he had his vision. He writes like a Hebrew or Aramaic speaker who's learned a bit of journeyman's Greek along the way. He's nothing special.  So why does the heavenly elder ask him about the identity of the crowd? John appears put-out at this reversal of roles: “Sir, you are the one that knows.” he says.

Why ask the question? Might it be that not knowing at the outset is a part of the process and that a question nails that insecurity better? The first part of the elder's question provokes an immediate response: No, I am not one of those saints. The Revelator must feel the rawness of his own life first - the rags which barely cover his nakedness, the banishment and hard labour on the Island of Patmos.

Try to remember that the emphasis in the elder's question is on the second part:  “...where have they come from?”  The “clearly not me” surrenders a little bit in the elder's explanation that these are ordinary humans who have

"...come out of the great ordeal; they have washed their robes and
made them white in the blood of the Lamb."

My life in the salt mine as an exile for Christ performs some change in my nature. The pain of faithful life is not wasted. I am a prisoner. I am a member of a persecuted religious minority in a Roman outpost. I write in a language in which I have no ease because I am impelled to testify to the victory of God in the presence of my brothers and sisters. I am a member of a tiny church with a difficult demographic and an uncertain future. My faith is pretty well all that I have. I struggle to profess that faith in the midst of colleagues, parents or children who share little of it.

I now know the answer to both sides of the elder's question:

I am not there right now.
But those who are
or will be there
were once where I am now.