Jesus is clear that his mission is first of all to the "...lost sheep of the house of Israel". The lapsed 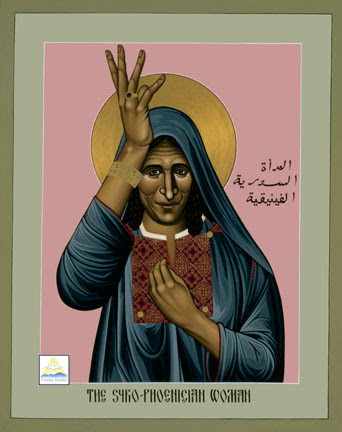 and neglected Jews of Roman Palestine were the first recipients of his message. It is to their towns and hamlets which Jesus and his disciples first traveled with the message of God's closeness and the presence of his Kingdom. The Gospels don't draw the line there. Jesus' parables hint warmly of an expanded and much more inclusive Mission - one which will ultimately include the Gentile tribes and nations from which most of our families spring. The starting point, however, seemed much narrower. The lost sheep got the first crack at Jesus and his disciples.

"Me too - I want in", says a Syrophoenician woman to Jesus in this Sunday's Gospel reading. "Surely there's enough leftover grace - crumbs even -  for my daughter and myself. We want to have some of it too."

And so this unnamed Canaanite woman joins a collection of characters in the New Testament - gutsy and opportunistic - who, by hook or by crook, present themselves at the head of the queue - who yell out or push or squeeze their way into the light and are rewarded rather than rebuffed. Their expression of need is raw and strong and honest.  They will do what it takes to present themselves before the source of their wholeness - their healing - their restoration.   Some of them are real people who Jesus encountered in the course of his ministry. He praises their aggressive approach as an example of great faith. Others are characters in his parables - admirable characters who we are to emulate.. The woman in this week's reading joins with the persistent widow (Lk 18:1-8), Zaccheus in his tree (Lk 19:1-10), the unrighteous steward (Lk 16:1-13), blind Bartimaeus by the side of the road (Mk 10:46-52) as well as the anonymous woman with her jar of ointment who crashed a dinner party Jesus was attending (Lk 7:36-50).

They demonstrate, for our benefit, the power of sheer bloody-mindedness.

Do you want in? You might want to reset your compass. Accepting one's lot in life, putting on a pleasant face in the midst of terrible troubles, keeping one's problems to one's self, waiting to be invited rather than just showing up - these are polite manners of life for people in gated communities or people in cold northern climes who distrust their neighbors - Viking etiquette maybe but no Kingdom virtue. Jesus, on the other hand, tells us to ask in order that we may receive. He says that for the door to be opened to us we first need to knock.

He doesn't even seem particularly dismayed by the thought of our doing so with a very large stone.