Israel had to argue for its right to be ruled by a king like all the other nations. "Don't confuse yourself with other nations" says God, through the prophet Samuel.  "You are different. A king will not make you great or a major player or a big fish. You are unique - ruled as you are by judges and informed by prophets"

Nonetheless Israel's desire to be like all the other nations prevails. God relents and lets them have their king. The Reign of Saul is Israel's first stab at being completely ordinary and it is a resounding failure. Saul is rejected by God and his fate is sealed. Samuel is instructed to anoint a new king from 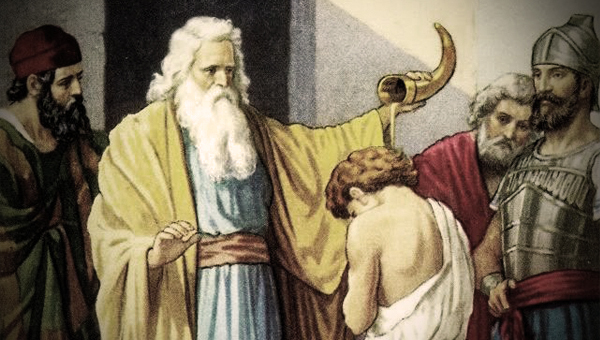 among the sons of Jesse. He arrives at Jesse's house. The boys are led in one at a time from the greatest to the least. Good strong boys they are, too. Each time Samuel the prophet sees one of them he is reassured that they have King written all over them. And each time God tells the prophet "No, not this one."

He finally has to ask if there are other boys that he hasn't met and Jesse admits that the youngest has been left off the list. He's been sent out to take care of the flocks while his brothers are being admired for their natural aptitudes - their ease of speech - their leadership potential. These were the boys fit to be presented to a prophet. Not the youngest. He was left off the list. David is sent for and Samuel anoints him as King.

The adjectives "big" and "little" are some of the first things we learn. We're told to think big, we can hardly wait to be big. We are attracted to big ideas, big houses, big cars and big ambitions and we will need to deal with the fact that we miss out rather a lot because of that obsession. That's the way of the world - that's the way the world thinks. We too are a unique people and we give up that uniqueness all too quickly. Our history of faith, contained in the salvation history covering the two Testaments of the Bible, is filled with stories of world changing events taking place in out-of-the-way locations and with quite ordinary people initiating those events at the behest of God's voice. The stone which the builders rejected becomes the capstone of the arch. Tiny mustard seeds grow into great and commodious plants within the garden - in whose branches the birds of the air can make their nests. Suffering becomes victory. Weakness proves to be strength.

The ordinary logic of the world does not explain what happens in the life of faith.