About five months ago I used an illustration in a sermon of the electrical arc which jumps from one electrode to the other in an oil-burning furnace.  Arcs don't occur when the two electrodes are touching.  That would just be the normal transmission of an electrical current. Arcs take place when there is a space between the two electrodes and a gaseous medium between them (like air) which doesn't normally conduct electricity that well.  There is a "medium" which is resistant and there is a "something" which defeats that resistance.  In the case of the oil burner the electrical arc is hot enough to ignite the atomized fuel oil that is blown over it, the furnace heats up nicely and you are able to sit in a warm house with your book on a winter evening.

I thought again of the electrical arc when I read the interaction in this week's Gospel between the angel Gabriel and Mary.  Gabriel ends his words to Mary by saying that "...nothing will be impossible with God".  Mary's response to the angel is swift: "Here am I, the handmaid of the Lord". 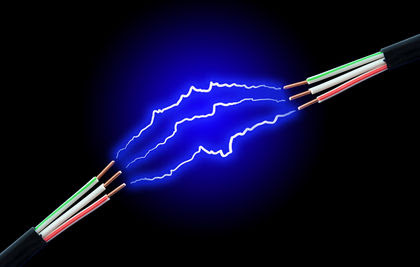 We always read this exchange as if the wires were touching.  The invitation of God meets the willing and immediate response of the human conversation partner with little resistance, no flash and no mess.  We do not read even a moment's silence into the story between the end of the echo of Gabriel's words in whatever dwelling they were spoken and Mary's response - a silence in which both "yes" and "no" remain a possibility.  Nor do we read such a pregnant pause into the majority of encounters between God and all the heroic humans of the Bible's stories.  At the right side of the painting God speaks through an angel or a prophet. At the left side the object of God's discourse says simply "yes, let it be so".

God asks great things of us:  That our lives as families and individuals be placed within the economy of his unfolding Kingdom; that we welcome the stranger and make provision for the poor; that we act fearlessly, graciously and sacrificially with the things that make up our substance and that we forgive even when others will not.   God asks that we continue to exercise our faith in him in circumstances which would rightly rob others of a reasonable basis for hope.

This is not nothing.
It is worth at least a pause.

Faith - mine, yours and the faith of young Mary in Nazareth - is what ventures, appropriately paused and open-eyed, across that uncertain and resistant space.