At unity with itself? 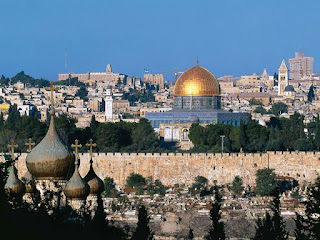 The First Sunday of Advent

If you've ever been to Jerusalem you know that the countryside is divided with high walls.  Unity?  How accurate is that today?  Was it accurate during the 20th century, maybe, or during the days of the Ottoman Empire?  How about the Crusades or the dying days of the Roman Empire?  How about the time of Jesus?  Go back even further:  Add the Persians to the mix or the Babylonians.

You might hold out for some shred of glory and unity in the days of David or Solomon, but I suspect that even a cursory reading of the Books of Samuel and the Books of Kings moves more in the direction of Jerusalem being a place of intrigue, energy and turmoil.  Civic and religious unity in the Holy City?  Possibly not.

I can attest to the fact, though, that the city is alive this day with pilgrims.  From all countries in the world men and women meander through the groups of soldiers in east Jerusalem on their way to places which stand, for them, as symbols of wholeness, unity and transformation.  What do they see that the news media doesn't?

We are perhaps looking for the wrong thing.  The reality of the world always appears to contrast with what God promised to Abraham and with what the prophets saw in their visions.  What Mary proclaimed in the Magnificat and what John the Baptist foretold is not negated by the humanity of Jesus and the rejection of his message by many.  With such a vision of unity in the heads of faithful people, schools and hospitals are built, sinners are forgiven, strangers are welcomed, the poor are provisioned and nations are evangelized.  These are as incontrovertible a series of facts as any disasters on the front page of the newspaper.

We are in the business - you and I, John the Baptist, Mary and King David - of seeing "into things" and not merely describing what has hit us on the head.  Keep your eyes open.  Act on the vision!