The raw material of Christian mission. 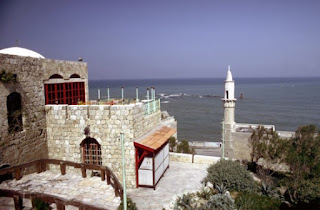 The 4th Sunday of Easter
Year C
Acts 9:36-43
The reading from the Acts of Apostles this Sunday ends in the town of Joppa (Jaffa - now virtually a suburb of Tel Aviv) and the house of "...a certain Simon, a tanner."
The house still stands today - it's one which I've walked around on a couple of trips to Jaffa although it's always been closed for renovations.  I can shut my eyes and see the place.  It's been in the possession, for years, of successive generations of an Armenian family - the Zakarians.   Black-and-white photographs from the end of the Ottoman era can still be found of long-dead Zakarians - or perhaps their hired men - in the walled courtyard dipping hides in large stone vats beside the staircase leading up to the famous rooftop. Back in the day, Mrs Zakarian would welcome Christian pilgrims in great number and take them up to that flat rooftop overlooking the harbour.
It's the place where Peter went up to pray.   The vision he had there is the subject of oursecond reading next Sunday.  But the stage is set here this week with Peter staying in the house of "...a certain Simon" in Joppa, after having there raised from death a particular woman named Tabitha (whose Greek name was Dorcas) after he was sent for in another town, Lydda, by two nameless associates of the disciples.
How very local - these stories of the early church – and how very wrapped up they are with the lives of ordinary individuals living in ordinary named towns.  Our time and place is not irrelevant to our participation in the extension of God’s kingdom.  We do not leave behind our work, our families, our language and culture when we take part in the works of God.  They are the raw material of Mission and the very things God would use for his glory.