Decide now how you will live then.... 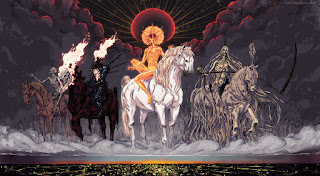 A quick web search on “movies with apocalyptic themes” will net you hundreds of films from the late fifties to the present day.  Recurring story lines include War, Disease, Monsters (including everybody’s favorites - the Zombies), Economic Collapse, Supernatural Agents, The Collapsing Sun, Impact Events, Aliens, Ecological Disasters and Technological Misadventure.  As special effect capabilities increased over the years we were treated to an ever more convincing array of crashing waves, deep freezes, explosions and the obligatory monster wave crashing down the main street of a major American city tipping cars this way and that.

It’s when we look to the minor plots of these movies that the motivation for such films appears.  Love is kindled or rediscovered.  A beleaguered group of survivors creates something akin to community in the safety of isolated surroundings.  The vulnerable are protected and the innocence of children is valued and promoted.  Some shred of goodness persists.

What is it, in us, which will survives when the structures of society are swept away by trouble, fire, flood or famine?  What part of genuine humanity will remain standing on the last day?

Jesus, in the reading from Luke’s Gospel for the First Sunday in Advent, tells us that we will be swamped by events around us.  While he does not elaborate, he paints a charged picture of the future as a place which will contain tumultuous changes and fearful events.  It's a real and eventful world - full of risks and sharp bits - and we are not promised absolutely safety from it.  But the message is not one designed to provoke despair or apathy.  Rather than curling in on ourselves we are commanded to be alert and, on at least two occasions, to "stand" in hope.  In such a world cynicism and despair are not inevitable.  We don't need to be beaten.  There is an enduring treasure worth keeping - something good worth waiting for and hunkering down to preserve.

Those of you who have seen trouble or endured it yourselves will know that it is a great revealer of human secrets and capabilities.

Decide now how you will live then.