Tell him what you need... 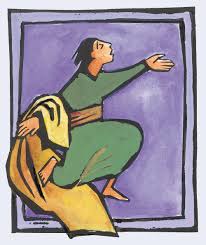 A recurring character, in stories concerning Jesus and in the parables which Jesus told, is the man or woman who will not shut up - even when they’ve been told to.

In the Gospel parables we meet such characters as the widow who hammered on the judge’s door until he delivered justice to her (Luke 18:1-8), or the traveller who arrived at midnight asking for bread to feed a traveling friend and would not be turned away until the door was opened (Luke 11:5-8).

In stories concerning Jesus there is the Canaanite woman looking for healing for her daughter who shouted out even though she’d been told to stop disturbing the master (Matthew 15:21-28) and, in this Sunday’s Gospel reading, blind Bartimeus who, when he heard that Jesus was walking by made a complete spectacle of himself in spite of the disciples’ protests until Jesus walked over to him and healed him.

Politeness and goodness is something we oftentimes conflate with the idea of silence when we are educating others - particularly children.  With respect to ourselves, do we perhaps worry that we might appear dependent or lose face in the community if we express our needs openly and passionately?

And yet Jesus seems to find that this very importunity - this same honest expression of need is something akin to faith - some part of faith - an example of faith on the part of those who come to him openly and honestly and even loudly.

Not all silence is golden.