From the other side of the tracks. 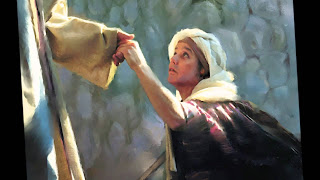 Works of art depicting the encounter between Jesus and the Canaanite woman generally show the beginning of the story. The woman is outside the crowd of Jesus and his disciples trying desperately to work herself in to the centre.  Other pictures show Jesus with his back turned to a woman who is on her knees in an attitude of supplication.  It doesn’t seem fair.  It doesn’t seem like Jesus to do such a thing.

It is certainly one of the “harder readings” of the New Testament.   It would appear that Jesus initially rejects any contact with the woman because she is the wrong religion and the wrong nation.  She is from the other side of the tracks.

That it works out in the end and that the woman’s daughter is eventually healed doesn’t completely erase the sting.  It rankles.  It leaves us with a bad taste in our mouths.

Clergy should probably be obliged to preach on at least a half dozen of these “hard readings” of the New Testament each year – for no other reason that many of us feel exactly like this woman – that we are trying to work our way into the crowd and have encountered resistance.  We’ve been members of churches where it would appear that there are others at the “centre” who belong more than we do.  We have tried to establish a relationship with God and we worry that there is something about us – some besetting sin or malfunction – which excludes us.  We doubt too much, we’ve had too many bad things happen to us, we’re just “wrong”.

I make no promises about reducing this hard reading to something easy and matter-of-fact.  There’s enough of “us” though, in the character of this woman struggling to obtain a hearing from Jesus that it’s a story which cannot and must not be avoided.

I look forward to seeing you this Sunday